Former Speaker of the House Newt Gingrich appeared on The View where he was grilled by the panel on Comey, the media, and Trump. The liberal hosts constantly tried to pin him in a corner but Gingrich kept his cool, even after the hosts denied basic facts regarding Clinton’s email investigation.

At the beginning of the conversation, Gingrich said he supported Trump’s belief that James Comey’s testimony vindicated him, saying, “If you go back and read his testimony, a lot of this puff shrinks.” Joy Behar didn’t agree in the least, prompting the Congressman to tell her, “I know you have hope.” Behar questioned, though, Comey’s handling of Trump versus Hillary Clinton.

“I think he found more than enough about Mrs. Clinton which is why she’s still Mrs. Clinton,” Gingrich said. Goldberg immediately objected, saying, “That was double spoken at its best. What did you just say? What the hell did you just say?!” He clarified, “She would be President Clinton if he found nothing.”

The testy exchanges continued over Comey essentially calling Trump a liar, with Gingrich questioning whether the former FBI director was being honest. “I think they will each call each other liars. Remember, Comey was fired. In my experience, people who are fired often are unhappy,” he argued. Behar shot back, “But he wrote those memos before he was fired, so he wasn’t disgruntled yet.”

Countered Gingrich, “You assume he wrote those memos. Of course, he was disgruntled.” Goldberg wasn’t buying any of it and then asked if he believed Barack Obama wiretapped Trump. The former Speaker of the House tried to sidestep the question by saying he believes “there were people being wiretapped,” prompting her to angrily exclaim, “C’mon, no!”

Gingrich at least conceded that Obama was born in the U.S., leading Goldberg to exclaim, “Thank god.” Gingrich then stated, “I’m not going to defend Trump as a paragon of purity.” She replied, “Not a paragon of purity, but a guy at least who’ll tell the truth.” He responded, “I think he tells the truth a lot, and I think the American people concluded he was a better gamble on our future than Hillary Clinton.

Behar fired back, “Three million do not agree with that.” He, in turn, retorted, “That was all in California.” Gingrich went on to rip media coverage of Trump, after which Goldberg could hardly contain herself.

Jedediah Bila asked Gingrich about Trump’s support among the public. “Are people frustrated with him, disappointed with him? What are they feeling out there?” Bila asked.

Gingrich claimed that he was surprised Trump had any support with the public after the “endless barrage” of negative media attention that Trump has faced since he announced he was running for president. He even cited a recent Harvard study which found 93% negative media coverage, but that didn’t stop hosts Joy Behar and Whoopi Goldberg from rudely scoffing and laughing after he stated this fact.
GINGRICH: I think it’s amazing if you look at the — for example, CNN’s 93% negative coverage according to Harvard, 93% negative, I think it’s a miracle that Trump has any approval.

[scoffing at a table]

BEHAR: I have a question, too.

After disruption ensued at the table, Whoopi raised her hand and claimed that before Trump was elected, the media actually loved him. After Gingrich denied that the media’s coverage was all positive, Whoopi made up a ridiculous claim that “98 percent” of Trump’s coverage had been positive:

WHOOPI: So, do you mean, because I recall and maybe I’m crazy, but I recall from the time the gentleman came down the escalator until the time he won, he was 24/7 on every television on every network forcing– making one of the heads of the networks saying, ‘yeah, it wasn’t good for America but it was great for us.’ It was all positive until people started asking questions. Now —

GINGRICH: It wasn’t all positive!

SUNNY HOSTIN: It was live coverage of Donald Trump was saying.

GINGRICH: It was all noisy but it wasn’t all positive.

BILA: No, I disagree with that…

[to Bila] I know you disagree with it but I don’t care. I know what I saw. [throws hands up in the air]

Amid Her Anthem/Flag Protests Gwen Barry Deleted Her Website Where She Is Pictured Holding The U.S. Flag (Images) 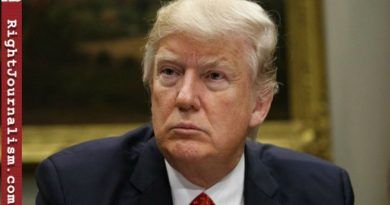 Eye For An Eye! President Trump Vows To Seek Vengeance For The Death Of The Killed Border Patrol Officer!

The View is the biggest disappointment on TV! If you watch it you are a sheep! So one sided and sensless it should be cancelled!

I totally agree with you Pierre….They have nothing nice to say about anyone not even themselves….They have nothing but anger and hatred to our president and those that voted him in….they are such sad, sad, women….I will most definitely pray for them to find peace within their soul…