A Baltimore County daycare owner is behind bars after admitting she shot her husband.

What began as a situation involving a woman barricaded in a hotel room has morphed into a Twitter campaign to free Baltimore-area resident Shanteari Weems, who admits she shot her husband.

The incident began Thursday night at the Mandarin Oriental Hotel in Washington, D.C.

According to a police affidavit, the smoke detector went off in Weems ‘ hotel room and is believed to have been triggered by a gun being fired.

Police arrived at the hotel at 7:40 p.m. By then, Weems, 50, had barricaded herself inside a room with her husband on the eighth floor. During the hour-long standoff, police attempted to get the Randallstown, Maryland woman to exit the room. She instead refused and told police she wanted to shoot herself.

When asked if anyone else was in the room, Weems told police her husband of five years is “a child molester.” Her husband then shouted to police that he had sustained injuries to his head and leg, according to FOX 5 DC. Weems surrendered shortly after 8:30 p.m. Her husband was transported to an area hospital with life-threatening injuries.

Inside the room, police found a handgun in an unlocked safe and one in the woman’s purse. A letter detailing what led Weems to shoot her husband and her will and testament were also located in the room. The letter corroborated Weems’ story that she intended to harm her husband.

After police forced their way into the room, Weems offered a justification for shooting the man.

Shanteari Weems told police she wounded her husband after several children at Lil Kidz Kastle Daycare Center claimed he had molested them.

Weems said she reported the allegation to the proper authorities.

Police said a notebook with comments about the shooting included one from Weems that said, “I’m going to shoot [victim], but not kill him.”

One of the letters was a detailed apology to her “babies”, whom the husband had reportedly abused and the fact that she did not know about it.

The distraught business owner told police she frequently makes trips to the district, but she never brings a gun with her. Her decision to do so on Thursday was allegedly rooted in emotion. Weems said she confronted her husband about the allegations. When he became upset, Weems claimed her husband stood up and began making his way towards her. That’s when she shot him.

She owns the gun legally!

Weems has been held in jail pending a hearing Monday, which enraged some activists on Twitter.

Go Fund Me was created and social media is calling or the police to free her!

“Baltimore County detectives are currently monitoring the recent developments in Washington D.C.,” Brown said in a statement. “Due to the sensitive circumstances leading up to this incident, the Baltimore County Police Department continues to support the families impacted.” 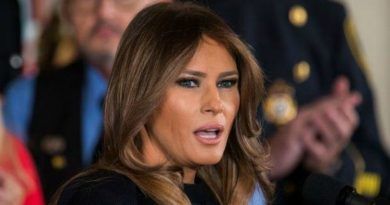 FIRST LADY RESPOND TO NEW YORK ATTACK WITH A HEARTBREAKING STATEMENT THAT WILL MELT YOUR HEART!

Photos: Hillary Clinton Posted A Picture To Instagram With Some Books In Visible – Glass Devils Having SEX Was One Of Them