The only thing I can say is that we are so happy Hillary is not in the White House! Don’t get me wrong…I am not opposed to a woman President but, when a woman finally gets to the White House, We want her to be honest, trustworthy, and a good leader. All things Hillary is NOT!

It’s great when a military man can tell Clinton off the way she deserves. Veteran U.S. Navy SEAL, Dom Raso recorded a video last year in which he blasted Democrat presidential front-runner Hillary Clinton. He called out Clinton’s false claims of having dodged sniper fire while landing in Bosnia in 1996, when at the time she was serving as secretary of state, as dishonorable and proof that she is unworthy to lead our country.

Raso calls Clinton a liar who used “the heroism of our nation’s armed forces to promote herself as the next commander in chief.”

In the video below we can see Hillary Clinton claiming that back in 1996, she had to dodge enemy sniper fire when she landed in Bosnia.
“I remember landing under sniper fire. There was supposed to be some kind of a greeting ceremony at the airport but instead, we just ran with our heads down to get into the vehicle to get to our base. It was a moment of great pride for me,” Clinton then said.

However, Raso pointed out that video footage proves Clinton was greeted warmly with handshakes that day. She tried to blame her lie on a mistake, calling it a “misstatement.”

“So Hillary claims she dodged sniper fire to get to her car. Here’s is the video of what really happened, and in the footage, I’m not sure I see any sniper fire,” Raso said.

“What makes this truly disgusting to me is that when she was called on it, she dismissed it like it was no big deal. Only someone completely arrogant, ignorant and disrespectful of what really happens in war could say something like that.”
“In my 12-year military career, I never heard an excuse like that from my leadership,” Raso told reporters. “It’s impossible to even imagine that happening.”
“Hillary was willing to lie in order to take advantage of that feeling of gratitude and awe Americans have for those who serve,” he said.

“Hillary, the fact that you think the brave and selfless acts of our nation’s heroes are yours to falsely associate yourself with just to advance your career, proves that you are not worthy of the office you seek,” Raso concluded.

By now we’ve learned that we cannot believe a word this woman says. But to use our beautiful soldiers who protect us all every day and try to make yourself bigger than them and how you show no fear really is one of the lowest, disgusting vile incidents in the history of this country.

Early Alabama Senate Race Exit Polls Are In And It Seems That President Trump Helped Roy Moore A Lot! 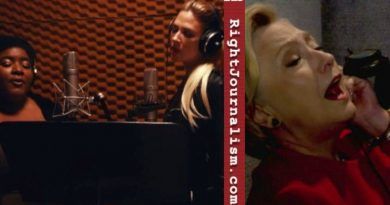 Hilarious! The Feminist Anthem Is Out And The Star Of The Song Is Hillary Clinton (Video)

David Hogg Announces That He Will Run For Office, And Claims That Ocasio-Cortez Will Be President!

I’m in agreement with the author, Michelle. That Killary lies is no surprise and doesn’t bother me. But if she were to be put in the position of Commander-in-chief and take on the mantle of bravery under fire when she doesn’t deserve it, that would make me angry beyond measure. A commander is to be trusted in everything, and she has been proven to be trustworthy in nothing. To claim bravery when you are a coward and a jakyl means that those you lead would have no confidence in your leadership. It would demean the real bravery and fortitude that the soldiers of this country show each and every day. Clinton is nothing more than a piece of garbage that does not have the right to be placed in a position over the brave men and women of our military.