We all know what Hillary is and was for years. And now, it was discovered yet another crime to add to her laundry list! Apparently, Hillary Clinton sent more than $150,000 from her presidential campaign committee to an LLC designed to handle her income from books and speaking engagements, potentially in violation of the FEC rules on how to disburse leftover funds.

Clinton’s LLC was established to manage her income, a spokesperson acknowledged during the 2016 presidential campaign.

“ZFS was set up when Secretary Clinton left the State Department as an entity to manage her book and speaking income,” the Clinton spokesperson told the Guardian in April 2016. “No federal, state or local taxes were saved by the Clintons as a result of this structure.”

Payments from Hillary for America, Clinton’s former campaign committee, to ZFS began well after the election was over.

Once a campaign has concluded, politicians are not required to shut down their committees and can keep them running indefinitely, as the Center for Responsive Politics notes of unused campaign cash.

“Sometimes they do this to pay off campaign debt, or, to keep their war chest full if they were to ever seek office again,” they write. “After paying down any debts, money is often spent to ‘wind down’ the committee and pay off any office expenses.”

“For those who still have cash on hand, the FEC sets guidelines regarding how candidates’ committees may spend campaign funds,” they continue. “Other than the prohibition on personal use, there are few limitations. Punishments for violating the prohibition on personal use range from substantial fines to possible prison time.”
Former politicians and candidates may use unused funds for the likes of donating money to a recognized charity, contributing to the campaign committees of other politicians, giving to a federal, state, or local party activity, or disbursements for winding down costs.

“The only disbursements allowed for the Clinton or any other losing campaign are for winding down the campaign,” Cleta Mitchell, a partner in the Washington, D.C. office of Foley & Lardner LLP, told the Washington Free Beacon. “So the question is whether this is really for rent or whether the payments are to this entity for other types of work for Hillary, which would be personal use if it isn’t specifically tied to the winding down of the campaign.”

“Personal use is illegal under federal campaign finance law,” Mitchell said. “There are a number of questions that need to be answered to ensure that the campaign is using leftover campaign funds for a legally, permissible purpose.”

The rent payments were directed to Clinton’s LLC despite the campaign making no such payments—or any other payments—to the entity throughout the entirety of the 2016 election cycle, according to filings.”

Just another grain of sand on the beach of the mounting Hillary scandals. Time and patience will uncover the depth of how much damage Hillary has done to our Republic. This is why she should be jail, purged of all the stolen money that the Clintons has ripped off the citizens of the U.S., placed in prison and throw the keys away. 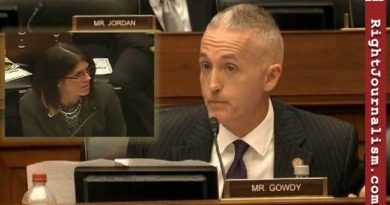 This evil woman needs to be locked up they have about destroyed our count df y and her and xcx Obama are still trying paying g off people to go against our president cheating in the elections undermining president Trump every country they travel to mrs Obama was on a speaking tour I cant re.em et were and bashed our president her evil muslium husband went to his ho.e land Africa and went to different leaders in africa giving speeches and mean while ever chance he got he bashed our president he is the only president who has never left Washington because him and the Clintons have been working overtime to over trow our goverment and turn it into Islamic country .that has ben there plan all along Obama said we ha e know lost our freedom and now they are sensoring us and removing conservative news this has to stop and what they are doing to our president trying to rail road him because he is turning over all the truth about these corrupt politicians. God bless our president and God help us all if those demacrats win