Far be it for us to tell President Pudding Pop how to do his job but you’d THINK the assassination of the former Japanese Prime Minister would garner at least a tweet from him or the White House, even though gosh golly and gee, it’s so HARD being president 24 hours a day.

He must need his nappy.

Although let’s be honest, whatever he tweets, writes, or says won’t be from him anyway, why not just get it out the door? We suppose the interns doing all of this need their shut-eye too.

Trump and Pence have issued statements about Shinzo Abe. Biden and Harris have not.

While not one of our leaders issued a statement Russia called this act an act of terrorism:

Japan’s elections are in 3 days. Abe has been a fierce opponent of communism and globalism throughout his career, as well as a staunch ally of Taiwan. He also broke from many world leaders on his view of the Russia-Ukrainian war.

Chinese citizens are apparently celebrating his death on social media:

Communists on Chinese social media Weibo are celebrating the assassination of Ex-Japanese PM Shinzo Abe, Japan's Trump who was campaigning to run again like Trump plans to in 2024

Is this the Marxist Liberal World Order sending Trump a warning not to run?pic.twitter.com/uCXtT9kQc9

The Chinese are celebrating the assassination of Shinzo Abe. Chinese social media flooded with celebratory messages.

The vast majority of Chinese are celebrating the misfortune of Prime Minister Shinzo Abe with as much enthusiasm as they do traditional holidays#ShinzoAbe#安倍晋三#위대한_번역운동#大翻译运动 #TheGreatTranslationMovement pic.twitter.com/G5UznEq3Ua

In the US, members of Antifa were reportedly celebrating as well:

Fascinating, as a foreigner that does not speak Japanese what I know Shinzo Abe from the best is maintaining pacifism consistently. It seems Antifa hates peace in general. Maybe because ANTIFA is a terrorist group.

Chilling photos have emerged of the moment Shinzo Abe’s suspected killer casually stands behind him just before he assassinates the former Japanese Prime Minister.

The images show Abe — who was Japan’s longest-serving leader — starting a campaign-rally speech in the western region of Nara, smiling as those around him clap.

Standing just feet behind the leader, 67, was an innocent-looking masked man wearing military-style pants and with a bag slung around his back.

Within minutes of the divisive politician starting his speech, that same man — identified as disgruntled 41-year-old veteran Tetsuya Yamagami — snuck closer to Abe and shot him dead in an attack that sparked immediate condemnation from leaders around the world.

🚨BREAKING: Japan’s former PM Shinzo Abe collapsed and was bleeding after apparently being shot during a campaign speech in western Japan. pic.twitter.com/iViQdQ9xsd

Here’s Why Gorsuch Joined Liberal Justices In A Deportation Case 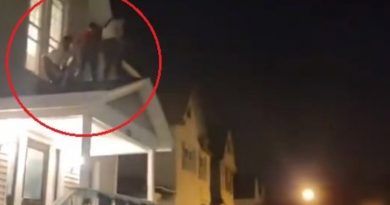 Just proves that the CCP and Antifa are one and the same… Scum.

I am in my 80’s and you would not want to really know what I am thinking about today’s world situation and the people trying to run (“RUIN”) eve sight!rything in