California is in big trouble companies and people are fleeing their state in record numbers due to high costs of living and oppressive taxes.

But instead of taking care of its own citizens they are making thing easier for illegals!

Like that wasn’t enough now they want to kill the free speech!
Richard Pan is an American politician currently serving in the California State Senate.

Pan recently introduced legislation to crack down on free speech on the internet.

Pan’s legislation would force online publishers to utilize state-sanctioned fact checkers to approve content before it is posted online.

He is a Democrat representing the 6th Senate District, which encompasses parts of Sacramento and Yolo counties. Pan is a member of the California Asian & Pacific Islander Legislative Caucus.

It targets social media based in California. But as you read the bill, you see it appears to define social media as any Internet blog, website, or communication.

This bill would require any person who operates a social media, as defined, Internet Web site with a physical presence in California to develop a strategic plan to verify news stories shared on its Web site. The bill would require the plan to include, among other things, a plan to mitigate the spread of false information through news stories, the utilization of fact-checkers to verify news stories, providing outreach to social media users, and placing a warning on a news story containing false information.

(b) The strategic plan shall include, but is not limited to, all of the following:

(1) A plan to mitigate the spread of false information through news stories.

(2) The utilization of fact-checkers to verify news stories.

(4) Placing a warning on a news story containing false information.

(c) As used in this section, “social media” means an electronic service or account, or electronic content, including, but not limited to, videos, still photographs, blogs, video blogs, podcasts, instant and text messages, email, online services or accounts, or Internet Web site profiles or locations.

I hope you can see the big picture this bill is a free speech killer!

Democrats try to assassinate freedom as if it were their fetus, same as freedom-destroying leftists everywhere (e.g. USSR, NAZI Germany, China, NK, Cuba, Venezuela and most Western countries run by Third Way socialists).

FBI Informant Attorney: Clintons Can Attack All They Want, But My Client Has the Truth (Video) 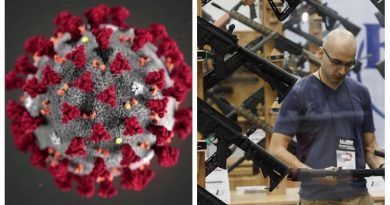 Another left wing loone that needs a straight jacket…these people are traitors..and should be treated as such..

HITLER is alive and well ~ Living in California !! Idiots !!

It is seditious conspiracy and genocide, congratulations to Pan!

Just when Georgw Soros is against Facebook and the social media, https://es.search.yahoo.com/search?p=Soros+is+against+the+social+media+in+Davos&fr=yset_chr_syc_oracle&type=default
the senator Richard Pan from CA passed an unconstitutional and genocidal law, in violation of the first amendment, Article [I] (Amendment 1 – Freedom of expression and religion) 13
Congress shall make no law respecting an establishment of religion, or prohibiting the free exercise thereof; or abridging the freedom of speech, or of the press; or the right of the people peaceably to assemble, and to petition the Government for a redress of grievances.
which makes me thinks that he has been bribed to do it by George Soros.

as the art. 13 of the American Convention on Human Rights
Article 13. Freedom of Thought and Expression
1. Everyone has the right to freedom of thought and expression. This right includes freedom to seek, receive, and impart information and ideas of all kinds, regardless of frontiers, either orally, in writing, in print, in the form of art, or through any other medium of one’s choice.
2. The exercise of the right provided for in the foregoing paragraph shall not be subject to prior censorship but shall be subject to subsequent imposition of liability, which shall be expressly established by law to the extent necessary to ensure:
a. respect for the rights or reputations of others; or
b. the protection of national security, public order, or public health or morals.
3. The right of expression may not be restricted by indirect methods or means, such as the abuse of government or private controls over newsprint, radio broadcasting frequencies, or equipment used in the dissemination of information, or by any other means tending to impede the communication and circulation of ideas and opinions.
4. Notwithstanding the provisions of paragraph 2 above, public entertainments may be subject by law to prior censorship for the sole purpose of regulating access to them for the moral protection of childhood and adolescence.
5. Any propaganda for war and any advocacy of national, racial, or religious hatred that constitute incitements to lawless violence or to any other similar action against any person or group of persons on any grounds including those of race, color, religion, language, or national origin shall be considered as offenses punishable by law.
http://www.ohchr.org/EN/ProfessionalInterest/Pages/CrimeOfGenocide.aspx
It is the supreme law of the land according with the article VI which also says: 2: This Constitution, and the Laws of the United States which shall be made in Pursuance thereof; and all Treaties made, or which shall be made, under the Authority of the United States, shall be the supreme Law of the Land; and the Judges in every State shall be bound thereby, any Thing in the Constitution or Laws of any State to the Contrary notwithstanding.
Which makes of senator Pan a criminal who deserves to be impeached according with the ARTICLE II Section 4
The President, Vice President and all civil Officers of the United States, shall be removed from Office on Impeachment for, and Conviction of, Treason, Bribery, or other high Crimes and Misdemeanors.
As he violated his oath of affirmation: 3: The Senators and Representatives before mentioned, and the Members of the several State Legislatures, and all executive and judicial Officers, both of the United States and of the several States, shall be bound by Oath or Affirmation, to support this Constitution; but no religious Test shall ever be required as a Qualification to any Office or public Trust under the United States.
https://www.rightjournalism.com/california-bill-sb1424-online-checkers-content/#comment-1248