After a woman wrote a letter to her husband confessing to sleeping with his brother, she never expected to get this response…

Woman Admits to Sleeping With Husband’s Brother. His Reply Is the Best Thing Ever.

I’m writing you this letter to tell you that I’m leaving you for good. I’ve been a good woman to you for seven years and I have nothing to show for it. These last two weeks have been hell. Your boss called to tell me that you had quit your job today and that was the last straw.

Last week, you came home and didn’t notice that I had gotten my hair and nails done, cooked your favorite meal and even wore a brand new negligee. You came home and ate in two minutes, and went straight to sleep after watching the game. You don’t tell me you love me anymore, you don’t touch me or anything. Either you’re cheating or you don’t love me anymore, whatever the case is, I’m gone.

P.S. If you’re trying to find me, don’t. Your BROTHER and I are moving away to West Virginia together!
Have a great life! > Your EX-Wife

Nothing has made my day more than receiving your letter. It’s true that you and I have been married for seven years, although a good woman is a far cry from what you’ve been. I watch sports so much to try to drown out your constant nagging. Too bad that doesn’t work. I did notice when you cut off all of your hair last week, the first thing that came to mind was “You look just like a man!” My mother raised me not to say anything if you can’t say anything nice.

When you cooked my favorite meal, you must have gotten me confused with MY BROTHER, because I stopped eating pork seven years ago. I went to sleep on you when you had on that new negligee because the price tag was still on it. I prayed that it was a coincidence that my brother had just borrowed fifty dollars from me that morning and your negligee was $49.99.

After all of this, I still loved you and felt that we could work it out. So when I discovered that I had hit the lotto for ten million dollars, I quit my job and bought us two tickets to Jamaica.

But when I got home you were gone. Everything happens for a reason I guess.
I hope you have the fulfilling life you always wanted. My lawyers said in your letter that you wrote, you won’t get a dime from me. So take care.

P.S. I don’t know if I ever told you this but Carl, my brother was born Carla. I hope that’s not a problem.

Signed,
Rich As Hell And Free!

Video: Internet Sleuth Found The Perfect Job For Kamala Harris After She Asked NASA If They Can Track Trees By Race In Pursuit Of Environmental Justice 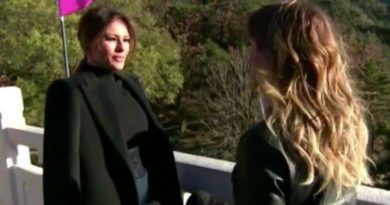 JUST IN! Melania Trump Reveals What She REALLY Thinks About Being First Lady (Video)

Liberals Attack Melania Trump Because Of Her Outfit In Puerto Rico, FLOTUS Gave Them An Answer With The Stunning Outfit She Wore Today! (Photos)