An Indiana man fatally shot two armed intruders in his home and then held two others at gunpoint during a bizarre burglary where he knew at least one of the would-be thieves, reports said.

The deadly incident came just one day after the same group had allegedly taken cash from him, the homeowner claimed in newly revealed court documents. A woman who survived the botched burglary had stayed with him several times over the years, he later told cops.

Court documents say the homeowner was asleep inside his home in the 1600 block of State Road 8 just outside of Auburn on May 15. The man told police he woke up to his dog barking and saw three people in his home, later identified as 42-year-old Tabitha L. Johnson, Dylan Morefield, and another unidentified woman. He said Dylan and the unidentified woman threatened him and at times both held a gun to his head. He said the three were stealing items from his home and demanded money, saying he told them they had taken all of his money the day before. He told police they then had him write a check with no name on it for $500.

He said it was still dark in the early morning hours but he was able to get his shotgun. He said it was dark so he shot Dylan and the third woman, who was later identified as Rameica Moore. Both died from their injuries, according to the coroner.

The homeowner said he escorted Tabitha out of the home and found another man, 42-year-old Shaun T. Kruse, outside of the home. He said he held the two remaining burglars at gunpoint and told Shaun to call 911, saying his home phone was destroyed and his cell phones were stolen before he could call for help.

Police arrested Johnson and Kruse and slapped them with murder and burglary charges, WPTA previously reported.

The featured image is the only picture from the incident the video is yet to be released! 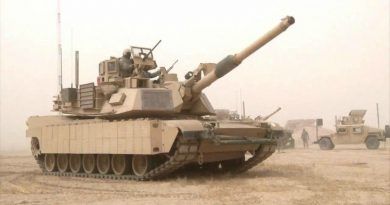 US M1 Abrams Battle Tank rolls over an IED (VIDEO)

Watch: Terrifying Shootout Between The Army and Mexican Drug Gangs on the US Border (Video)

Looks like apartments.
Sounds like drugs are involved.
Let me clean up a bit before we call the popo.
Should have eliminated the other two scum before calling the cops.

A person when threatened with a gun has a right to defend himself. Our USA Constitution and never forget it!!!!!

The featured image is from an attempted robbery in Neptune Beach back in 2020. Fix your journalism.

What an uplifting story.

Made my day I live in Indiana our law says you break into my home you die I shoot to kill not wound FJB.

Pic was not taken in In.

The murder charges are because Indiana has a “felony murder” charge, equal to an “intentional homicide” charge that applies to all persons involved in the crime when any person dies during the commission of a felony, even if it is one of the criminals.

tpm
Reply to  John in Indy

As it should be FJB.

Good thing another bad guy with a gun was on the scene.