At least five pieces sold, and lawyers have started vetting potential patrons who plan to attend the upcoming show. The pieces sold at an Oct. 1 “pop up” presentation in Los Angeles.

The buyers’ identities are unknown, nor is it known if more pieces sold after the presentation, The New York Post reported.

“But most of those allowed to buy works are long-term, private collectors with the gallery,” a source familiar with the sale said.

The sale of Biden’s artwork has raised a number of ethical questions for the White House. In July, White House officials crafted an agreement under which the purchases of the artwork would remain confidential – even from the artist himself. Hunter Biden’s attendance at the Los Angeles event came despite the White House previously saying that he would not know the identities of potential buyers.

Walter Shaub, the former Office of Government Ethics director under President Obama, previously told Fox News that Hunter Biden’s lucrative art career has a “shameful and grifty feeling to it.”

The concern over the painting sales revolves around the question of access to the White House. President Biden’s nominee to be U.S. ambassador to India, Los Angeles Mayor Eric Garcetti, was reportedly among the high-profile attendees at Hunter’s art show.

And today a reporter decided to face Biden and ask him about the corruption!

Reporter: “Are you concerned about potential corruption with your son’s art sales?”

Biden: “You got to be kidding me”

His answer in fact speaks volumes, he is not even gonna deny the fact that the whole show was filled with corruption! 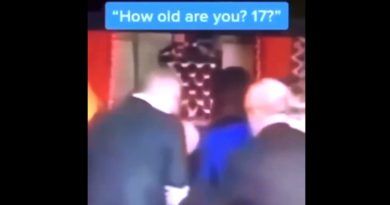 Video: Biden Asks A 6-Year-Old Girl If She Is “Seventeen” – Touches The Child’s Face In A Way That Is Highly Inappropriate

Poor little girl he is tugging around with him….photo op Biden loves little children. There would be little controversy had the ‘Hunter’ donated a percentage of the proceeds from sales to a school or clinic. But guess his pockets run deep.”Ya gotta be kidding me”?
Did Y’all hear that very important question ,what is your favorite flavor of ice crème sir?
Ooops! Sorry I meant how are your allergies Mr. President. Dude what are you gonna write Pres said “his allergies are good”?

The so called “art” which is nothing but crap that Hunter is selling is nothing more than people paying thousands of dollars for access to and favors of the crooked Biden’s. The crappy art belongs in the land fill with the rest of the garbage.

Most artests stuff does not sell until they are dead someone do him a favor and off the ahole.

all high art is just money laundering for wealthy.
Offshore dirty funds buy tangible Asset that Corporate side can use as collateral for inflated value loan that has no repayment.

Actually the crackhead hooker-panderer’s art gallery where he displayed his “art” has been given freely double the amount of “covid emergency funds” under the bizarre Joe Biden and which is being suppressed by msm. The crackhead didn’t “sell” that laughable adolescent garbage though msm tried to play it as though he has when in reality the art gallery itself got mega-coin and not the crackhead. It should also be noted that the crackhead’s “art” is manufactured via his cocaine-filled nostrils which he blows through his coke straw with the paint being on the surface of the canvas or paper. This is a common craft used by youngsters in grade school, sans cocaine.