The leaked draft majority opinion penned by Alito is dated February 10 and has almost certainly changed multiple times in the almost three months since it was written, but three conservative sources close to the Court say that the votes supporting the decision remain unchanged, according to reporting from the Washington Post.

Further, the report provides a window into the abject cowardice of Chief Justice John Roberts.

Chief Justice John Roberts, who has at times sided with the liberal wing of the court, still appears set to oppose the decision, with the report noting that Roberts was still attempting to persuade Coney Barrett and Kavanaugh to take a more incremental approach to allowing abortion restrictions.

John Roberts, being the absolute coward that he is, is apparently still lobbying for some kind of “compromise” that would hand violent extremists exactly what they want, while completely spitting on the Constitution of the United States.

There is also reason to believe Roberts has not given up. Many who know him well and have watched his maneuvering of the court through other issues are certain he is still preparing his own opinion in hopes he might draw at least one of the court’s newest conservatives to his side. Such an outcome might save 1973′s Roe and the subsequent affirming 1992 decision, Planned Parenthood v. Casey, while severely limiting their protections…

…Roberts’s incremental approach was evident when the court held oral arguments in December in Dobbs v. Jackson Women’s Health Organization. It concerns Mississippi’s law, which has never gone into effect, banning almost all abortions after 15 weeks of pregnancy. Roberts seemed to get no takers for a compromise that would erase the bright-line rule that Roe and Casey share: that states may not forbid abortions before viability, the point at which a fetus would survive outside the womb, usually 22 to 24 weeks.

Most observers of the court believe Roberts is still promoting a decision that would remove the viability line but otherwise keep Roe and Casey intact. Both liberals and conservatives are skeptical it can be done.

Of note is that if you remove the viability standard of Roe and Casey, then they cease to have any enforcement mechanism.

That’s all well and good if you are pro-life, but at that point, how can it be justified under the law to not overturn the two decisions completely? The answer is that it can’t be justified, and Roberts is just a spineless figure looking to appease the left while admitting he does not have the ability to preserve Roe the way he really wants to. It would simply pour gasoline on the fire of the abortion debate–instead of coming to some principled conclusion. 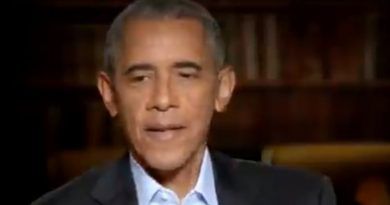 Video: Obama Says He Wants a Third Term Through a ‘Front Man’

His adopted children weren’t adopted legally, and they have black mail over him…Instead of just facing it he instead gives into whatever decision they want him to bend to…In other words, he’s a CROOKED JUDGE ON THE TAKE.

Roberts is a better actor than we thought. If he weasel’s on this, America is totally F’ed.

This should never reached the supreme court in roe vs.wade. no one should have the power to kill a citizen even in utero. Theyhavecrights. They can inherit before they are born. If you kill a pregnant woman, you are charged with killing the baby she is carrying! Ewual justice under the law. Abortion is murder.

Every sing piece of the disastrous Bush legacy is biting us on the ass. He was as bad or worse as any democrat we have ever had.