President Joe Biden has diverged from Trump-era energy policy as part of a shift in priorities towards combatting “climate change.”

Since taking office, Biden revoked permits of the Keystone XL pieline, froze oil drilling off the coast of Alaska, and placed another Michigan pipeline providing energy to the American Midwest under review.

Recent negotiations at the COP26 Conference in Glasgow have also produced stronger commitments to slash greenhouse gas (GHG) emissions, “phase down” coal and provide further financial assistance to developing countries. This all comes as Americans face higher costs for energy due to supply shocks and inflationary pressure created in part by pandemic lockdowns.

An upcoming Biden administration decision on a key pipeline could lead to widespread blackouts, Missouri-based power company Spire Energy warned in an email to customers.

The natural gas company is a major utility company, and serves 1.7 million homes throughout Missouri, Alabama, and Mississippi, emailed customers Wednesday that a federal review of the STL Pipeline could jeopardize their energy supply. The Federal Energy Regulatory Commission (FERC) will discuss revoking the pipeline’s permit during a Nov. 18 hearing.

“The STL Pipeline was built to support your energy needs, along with those of more than 650,000 homes and businesses in the St. Louis region,” Spire President Scott Carter wrote in the email. “Since 2019, this safe, fully operational pipeline has been bringing even more reliable and affordable natural gas to our community.”

“Unfortunately, while the STL Pipeline continues to operate today, it is now in jeopardy,” the email continued.

The email from Spire stated in part:

“Spire has been working to keep the pipeline in service this winter as government regulators consider its long-term use. In fact, this week our CEO and Chief Legal Counsel traveled to Washington D.C. to talk with as many lawmakers as possible to help them understand the potential impact to the St. Louis community. We’re confident that we’ve done everything we can to demonstrate the critical role the pipeline plays in providing the St. Louis community with energy, but there are no guarantees it will operate beyond Dec. 13.”

The pipeline, which travels from Illinois to Missouri, received FERC approval in 2018 and began servicing customers in 2019, according to Spire. Shortly after the pipeline came online, the Environmental Defense Fund (EDF) sued the FERC over its approval.

In June, a federal appellate court ruled in favor of the EDF, saying FERC didn’t adequately analyze the pipeline’s permit request years prior. The ruling prompted the current review.

So basically we could have the same situation as we did in Texas last winter!

Natural gas is clean, and the methods of extracting it have improved by leaps and bounds with the advent of technology such as directional drilling. It can heat homes and power vehicles. But in the name of combatting climate change, people will be forced to make some very harsh decisions this year.

The irony is that by attacking gas, climate advocates are ignoring a very environmentally-friendly solution. While obviously not renewable, it could be the thing that helps make the transition to renewables easier on the common person. And the people in charge at the moment seem to be bent on renewables and nothing but renewables, no matter the human cost. Just as many Americans are in no position to buy a Tesla, many Americans are in no position to convert to renewables right now

Meanwhile in Russia, OSO Gazprom is almost finished with construction on the Sakhalin–Khabarovsk–Vladivostok gas trunkline, which will serve people on the eastern edge of the country. Notice you do not see people taking issue with Russia or China and those nations’ effect on the environment. It raises an important question: Why can the world only be saved by limiting American energy?

Former U.S. Justice Department Prosecutor: FISA Warrants Could Not Have Been Issued Without Obama’s Knowledge (VIDEO) 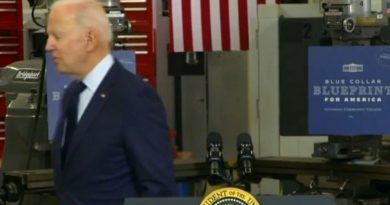 Videos: Biden Wanders Away From Podium Mid-Presser Then Says That Every Single Hospital Bed Will Be Occupied By An Alzheimer’s Patient In 15 Years

Watch! Sarah Sanders Shows No Mercy At MSNBC After They Asked Her If Trump Is a ‘Racist’