A Pulitzer Prize-winning Washington Post journalist was kicked out from a conference in south Florida for black women known as “Leading Women Defined,” for publishing information from a Q & A with Michelle Obama.

The Black Entertainment Television channel which hosted the conference had invited the Washington Post’s Robin Givhan to its conference, but then demanded she leave after she published her article, claiming that Obama’s talk had been conducted in a “sacred space.”

Via Page Six: “Givhan — the Washington Post’s fashion critic, who was awarded the Pulitzer Prize for Criticism in 2006 — posted a piece Wednesday quoting Obama discussing her campaign experiences in 2008: “I couldn’t count on my husband’s campaign to protect me; I had to protect myself.”

Despite her qualifications, Obama was dismayed at being asked if she could handle being first lady.

“The garden was a subversive act,” she said. “You can’t go in with guns blazing until people trust you.”

And just before welcoming Donald and Melania Trump to the White House, Obama said, she cried saying goodbye to the staff.

When BET brass saw the story, they kicked Givhan out and canceled a panel she was due to moderate.

But while claiming Michelle’s talk was private, BET didn’t play by its own rules: The network posted sections of the interview on its website, while Valerie Jarrett, who conducted the chat, teased on social media that fans should “tune in to BET” to hear all that Obama really said.

The incident spiraled into a social media screaming match, and Givhan was subjected to a barrage of abuse, with one tweeter saying she “violated a sacred trust between women, black women.” Writer Jamilah Lemieux posted, “This is a complete violation of journalistic ethics and Black girl code,” while other journalists defended Givhan.

Lemieux later told us, “As I recall, at the start of the event, we were told that were in ‘safe space’ and to put our phones away. That, to me, is a clear indication that no one was to be reporting on this moment. Furthermore, I am surprised that Ms. Givihan thought that she was invited to the conference to serve in her capacity as a reporter considering that she was to serve on a panel and, thus, had her travel and accommodations covered by the organizers.”

She added, “It is unfortunate that Ms. Givhan did not recognize that she was invited because she is a journalist of note and was thought to be someone who would benefit from the connections we have made and/or strengthened here this week. The expectation was, ostensibly, that she would be a great addition to this sister circle — not someone who made an outsider of herself by revealing things that were shared here.”

A BET rep insisted Givhan was “invited as a guest (not working press) to moderate a fashion panel,” and her travel and hotel were paid for by BET.

‘She was made aware that it was an intimate conversation in a sacred space of sisterhood and fellowship.'”

So every time Trump utters a syllable, no matter what the context or laws against leaking, leakers are applauded. But a journalist writes an article about what Obama said at gathering posted on social media and it violates some leftist code of respect. It’s called hypocrisy.

When you pursue a life of fame, you give up all but your most fundamental rights to privacy. You can be quoted and photographed without prior permission. Michelle chose to give up that privacy that day that she was FINALLY proud to be an American.

What do you think? Scroll down to comment below!

You Will Be Livid When You Read How Much Robert Mueller’s Russia Investigation Has Cost U.S. Taxpayers 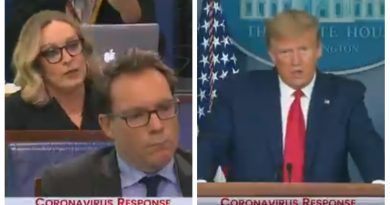 Video: Trump Asks if Muslims Will Get Special Treatment in Coronavirus Lockdowns – “The Christian Faith Is Treated Very Unfairly”

Video: Joe Biden Show Up In Nevada, Where He Dodged Questions And Thought He Was In Arizona