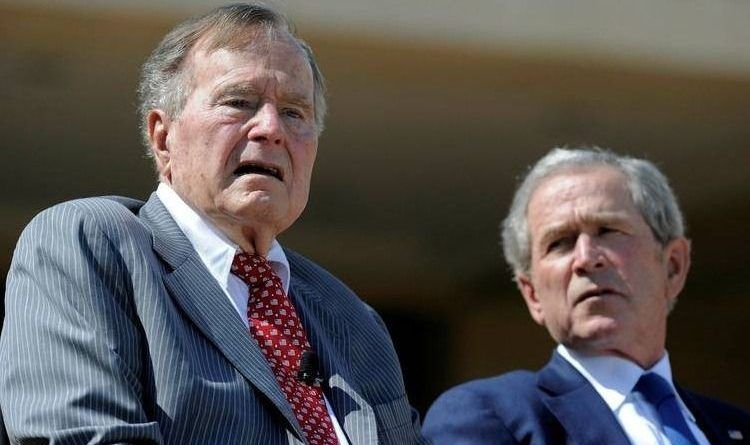 In a new book, both former presidents Bush revealed they did not vote for President Donald Trump, The elder Bush bashed President Donald Trump calling him a “blowhard” motivated by his ego and confirmed his disdain for Trump in Mark K. Updegrove’s book The Last Republicans: Inside the Extraordinary Relationship Between George H.W. Bush and George W. Bush, by attacking the current president’s character and leadership style.

“I don’t like him,” George H.W. Bush said in the book. “I don’t know much about him, but I know he’s a blowhard. And I’m not too excited about him being a leader.” Also, he added that Trump is not motivated by anything other than his ego.

George W. Bush even expresses concern in the book that, despite Trump’s political affiliation, he may be the last Republican president.

“I’m worried that I will be the last Republican president,” the younger Bush told the author and historian Mark K. Updegrove.

Wow, this guy doesn’t know what it means to be president,” the younger Bush also contributed, indicating that a president should not “exploit the anger, incite it” but rather “come up with ideas to deal with it.”

On top of their criticisms, both men suggest they did not vote for Trump in the 2016 election. In fact, in the book, George H.W. Bush confirms that he voted for Hillary Clinton. George W. Bush, however, did not vote for Clinton because she has “bad judgment.” Instead, he said he chose to leave the top of his ballot blank.

The White House responded to the criticism revealed in the new book.

“The American people voted to elect an outsider who is capable of implementing real, positive, and needed change – instead of a lifelong politician beholden to special interests,” White House press secretary Sarah Huckabee Sanders said in a statement. “If they were interested in continuing decades of costly mistakes, another establishment politician more concerned with putting politics over people would have won.”

Really disappointed with the Bushes. Bush NEVER said anything about Obama, who blamed him, criticized him for 8 years. NEVER, always kind of like “we don’t critic a sitting president” sounding so high and mighty. Now they come out of hiding to disrespect “we the people.”

Yes, we the people voted and we chose this man the same way they were chosen. So with respect, get over it and help this nation come together. Just know we the people are not globalist like you both are.

Please George H.W. Thank you for your statement, but We have a real President that love this country. Finally a man with a set of balls. Where were you when Obama was in charge?

Sure, and we also know where Jr. was in your back pocket Bush Sr. I don’t know how a person like bush sr. can even think like that. Amazing Trump is going to make them all look foolish. Go Trump Our President.

Sarah Sanders was well spoken in her statement.

It’s too bad Bush Sr. doesn’t understand anything other than what his son, Bush Jr. tells him, so I can’t blame him for saying what he did, but shame on Bush Jr. for blaming Trump for everything bad that has happened! It was Obama whom all but destroyed the USA while he was President! He’s a Traitor and should never have been our President! He wasn’t even born in the United States! He was born in Kenya! Good grief! Why don’t you idiots who speak against our President Trump, realize how much good he has done and is still doing for us, the REAL citizens of the USA? Trump has done more FOR the USA than ANY other President and he continues to do so!