There is something wrong with the justice system that needs to be changed so that the victim is not made the criminal and the criminal rapists are set free. Nowadays it seems that too many judges are on the wrong side of the law. Now, look what’s happening in the streets!

According to Pamela Geller, President of the American Freedom Defense Initiative (AFDI), the three Muslim refugee boys who plead guilty to the heinous sexual assault of a five-year-old girl in Idaho received no jail time in their sentencing on Tuesday.

The three boys — two from Iraq ages 7 and 10, and one from Sudan aged 14 — pleaded guilty in juvenile court in April to multiple counts of sex crimes in an incident that occurred last June at Fawnbrook Apartments in Twin Falls. The boys lured the 5-year-old Jayla, who is developmentally disabled into a laundry room, stripped of her clothing and sexually assaulted her, while the oldest boy filmed the entire incident.

Following a sentencing hearing on Monday, Judge Thomas Borresen of Idaho’s 5th Judicial District issued a gag order preventing everyone in the courtroom from saying anything about the sentence that these boys received.

But just when we thought that justice would finally be served, Judge Thomas Borreson who presided over the case has just done the unthinkable to the family, sending a clear message that Sharia Law is the supreme law of the land in Idaho, and that if you’re a Muslim, you’re allowed to rape infidel girls, exactly as the Quran instructs you to do.

However, the Judge did allow the family to say they were unhappy with the sentencing but threatened to jail them for contempt of court if they say why they are unhappy.

WorldNetDaily consulted with Mathew Staver, chairman, and co-founder of the nonprofit legal assistance agency Liberty Counsel, about the legality of issuing such a gag order after the fact in a criminal case: “It’s unconstitutional for the judge to do that. There are gag orders that can be put on people during a jury trial, or if it’s a minor they can prohibit you from mentioning the name of the minor, but they can’t gag you after the fact,” Staver said. “This is public at this point. This judge, it just seems like he’s forgotten about the First Amendment in this case. He has no authority to do this, he can’t hold someone in contempt to keep them from speaking out about their displeasure with the case after the fact.”

Staver said case law is clear on the subject of gag orders.

“The travesty of justice in Idaho is now complete,” wrote Geller. “In the summer of 2016, a 5-year-old girl was sexually assaulted and urinated upon by three Muslim migrant boys in Twin Falls, Idaho. Since then, instead of getting justice, the victim’s family has been abused by law enforcement and governing authorities as if they were the criminals – because what happened to their little girl contradicts the politically correct narrative about Muslim migrants. On Monday, the perpetrators were sentenced, and the final injustice was done to this poor girl.

“But even though the victim’s parents were not allowed to talk to me, there were 12 to 15 people in the courtroom who saw and heard the whole sorry business. I was informed of what happened by an anonymous source inside the courtroom – and the more I heard, the more I understood why this judge wanted to keep all the proceedings secret.”

Welcome to Obama’s America, Religion of Peace is at it again. If you call yourself a judge, a police officer, or a prosecutor, you deserve the due respect that goes with the position. But if you go rogue, and operate on the wrong side of the law, you are subject to violence from those you’ve wronged. Violating the status of your office, and betraying the public trust, creates a strong motivation for vengeance.

Judges like this put our justice system in the gutter!

I have only one wish! When we start to deport illegal immigrants, please make sure this judge goes along with them! 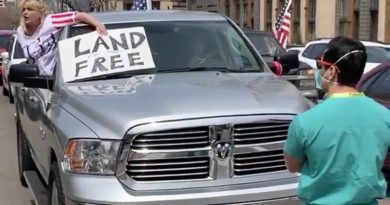 Video: Woman Screams “Go To China If You Want Communism” To A Nurse Who Counter Protested ‘Operation Gridlock’

Official: ‘Bikers For Trump’ Group Says That They Are Not Heading To Seattle’s ‘Chaz’ Area