We all know what Hillary is and was for years. This is why she should be jail, purged of all the stolen money that the Clintons has ripped off the citizens of the U.S., placed in prison and throw the keys away. That goes for all the Obama administration as well. If our elected representatives and the people they employ are not held accountable for their crimes then there is no justice for any of us.

Luckily, FBI informant on the Clinton-Uranium One deal decided to not be silent anymore and revealed he is eager to testify because of his “concerns about Russia’s activities in the United States.

The witness, identified by Reuters as William D. Campbell, worked as a lobbyist for a Russian firm.

In a telephone interview, Campbell said he wanted to testify in front of Congress because of his concerns about Russia’s activities in the United States, but declined to comment further.

Campbell’s lawyer, Victoria Toensing, who has not previously identified her client, said despite Campbell telling the government ”how corrupt the company was,” Rosatom still got permission to buy Uranium One. She did not say what Campbell would reveal regarding any alleged wrongdoing by Clinton.

Despite planing to testify in front of Congress, Campbell alleges to have evidence.

“I have worked with the Justice Department undercover for several years, and documentation relating to Uranium One and political influence does exist, and I have it,” he told Reuters.

Toensing also revealed to Reuters that Campbell informed the government of how corrupt Rosatom was — the Russian firm involved in the Uranium One deal — but that his concerns went ignored.

Previously, The Gateway Pundit reported: Victoria Toensing, the lawyer representing the FBI informant says there is “on-the-record quid pro quo” surrounding the Uranium One scandal with Bill Clinton receiving a $500,000 speaking fee from a Russian backed bank and the Clinton Foundation receiving millions of dollars from people involved in the deal.

As previously reported, not only was the FBI informant working on the Russian bribery case threatened by the Obama administration, he was blocked by the DOJ under then-AG Loretta Lynch from testifying to Congress.

Toensing said her client “is not only afraid of the Russian people, but he is afraid of the US government because of the threats the Obama administration made against him.”

My feeling is that Hillary Clinton is probably going to be thrown under the bus over this and Uranium one. There is no denying that she should be prosecuted. Hillary gets millions for uranium one. Later on, she and the DNC pay the Russians millions for dirt on Trump. And the left thinks none of this should be investigated at all.

I just hope the informant has all his info in duplicate and in safe places and his family affairs in order. Looking forward to some justice for crooked politicians. 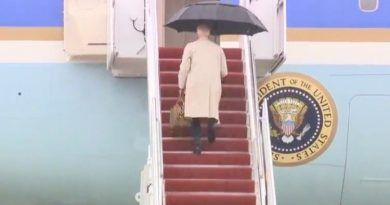 Screenshots: Former Friend Attacks Ivanka Trump For Staying Quiet Of The Overturning Of Roe vs. Wade, And Says She Had Abortion In High School

JUST IN! PRESIDENT TRUMP JUST TWEETED THE TWEET OF THE YEAR!

Hellary Clinton has made a huge mistake and can’t blame anyone but herself. By being so confident that she was finally going to be President. The media assured her as she chugged along pissing people off as she went. She was bigger than life and her rude followers the foul mouthed females bolstered her thoughts of being once supreme leader. Then the election a minor thing left to put up with.
Then the air went out of the bag, unable even to keep a civil tongue in her mouth the fatale night. “Oh to have been a fly on the wall”
At that point the real mistake really began instead of accepting defete Hellary rained he’ll down on MY PRESIDENT TRUMP yep she did continued for a year.
MY PRESIDENT TRUMP forgave her at first knowing that having the hormones she couldn’t help it. Then along the way she changed form being peskie to a thorn to being a bitch then she became a phough. MY PRESIDENT TRUMP decided that if she were going to play big boys games that those were going to be the stakes.
I hope you liked my little story, that in short is how things happened in my estimation. MY PRESIDENT TRUMP is not in my estimation a vindictive type guy, but enough is enough.
Thanks for reading
RL