The athletes who are protesting the National Anthem are totally DISRESPECTFUL AND UNPATRIOTIC to the country that has given them so much. They picked the wrong forum and manner on this issue. The national anthem and flag are honored at sporting events for veterans that served and gave their life for our country.

Dallas Cowboy Executive Vice President Stephen Jones obviously thinks the same. So, in a Thursday radio interview Jones said: ‘If they want to be a Dallas Cowboy stand for the anthem… or play elsewhere.’

If you don’t stand for the National Athene, you don’t play. Sound RIGHT to me. Stephen Jones’s comments comes after his father Cowboys Owner Jerry Jones’ said on Wednesday: “As far as the Dallas Cowboys, you know where I stand, the team knows where I stand. Our policy is you stand during the anthem, toe on the line.”

FINALLY! An owner that will not stand for the protest nonsense. NFL is not a political platform. Too bad the other owners are afraid of their players! Wish more owners would be as clear on their policy as he is.﻿

This is why on Friday, President Donald Trump praised Jerry Jones.

Trump tweeted: “Way to go Jerry. This is what the league should do!” along with a link to a Fox Business story that referred to Jones having said that Dallas Cowboys players must stand for the national anthem.

Way to go Jerry. This is what the league should do! https://t.co/yEP1jK57xi

I wish there were people in the NFL that were even half or one quarter the men that Jerry and Stephen Jones are. However, this needed to be done the first time happened.. now it is too little too late.

The kneeling players certainly have not accomplished anything positive from their actions. All they did was creating animosity towards the NFL for hijacking the national anthem, advocating for criminals who make a living by taking advantage of law-abiding citizens. And one thing they have accomplished is that the NFL lost a lot of money!! 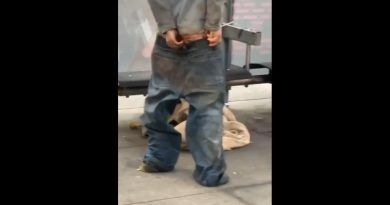 BREAKING NEWS! Mayor Of A Sanctuary City Dead At 65!

Cowboys are definitely my favorite team. The others and especially NFL can jump in Europe. If players don’t support the National Anthem fire them and they can go to work at McDonalds!

I USED TO LOVE THE COWBOYS. I LOVED THEM SINCE I MOVED TO TEXAS IN 1975. I HAVEN’T WATCHED THEM OR ANY OTHER FOOTBALL SINCE JERRY JONES TRIED TO STRADDLE THE FENCE WITH THE WHOLE TEAM, ALONG WITH JERRY KNEELING AND HIM SAYING THEY WERE SUPPORTING THE PLAYERS, WHILE SAYING THEY WOULDN’T KNEEL !!! I HAVE NO INTEREST IN FOOTBALL ANYMORE !!!

I”m not fan of cowboys football but defintely are a fan of their management.

Jones is right and the league had the policy but did not enforce it…Sadly it took them too long to take this stance so boycott them until hell freezes as the league continues to pamper these pansies. They should have fired everyone and replaced them with those who would stand.. The fans would have supported the teams and the game would have been a whole lot more interesting with new blood.