On Saturday morning, a group of protestors disrupted London mayor, Sadiq Khan’s address on gender equality to the Fabian Society in central London. Khan’s address was suspended for several minutes while a small number of demonstrators from a recently formed far-right group called the White Pendragons made their protest.

“Ladies and gentlemen, we’re here today to make a non-violent, peaceful citizen’s arrest,” a man who opened the protest told the audience by standing up and reading a statement.

Via Breitbart: “Surrounded by security, they declared: “We stand under common law jurisdiction. If you touch us, you’ll be done for common assault. Please stand back, do not touch us.”

They are reported to have been motivated by Khan’s continued efforts to sabotage Britain’s exit from the European Union and by his outspoken opposition to U.S. President Donald Trump visiting the country. One carried a small American flag.

One man shouted “No to the EU” and another displayed a US flag.

WATCH | "To borrow a phrase from Donald Trump, London is turning into a shithole under Sadiq Khan!"

The brilliant @RaheemKassam calls out the failing mainstream media for refusing to report on the horrific crimewave taking place in the capital on Sadiq Khan's watch. pic.twitter.com/t0OcOJWeab

London’s first Muslim mayor has been under increasing pressure in recent months as his city has been rocked by terrorist attacks and a wave of violent crime, and he has increasingly retreated into pronouncements on international affairs which fall far outside his remit.

Despite claims by Khan in March 2017 that London is “the safest global city in the world and one of the safest cities in the world,” the latest crime statistics show youth homicides are up by an astonishing 70 percent.

Total homicides are up by 27.1 percent, serious youth violence 19 percent, robbery 33.4 percent, and burglaries 18.7 percent, among a host of other double-digit rises.

Figures like these are thanks in no small part to Khan diverting resources into controversial projects such as his online hate crime hub, and his determination to “do everything in my power to cut stop and search” by police — which he considered problematic due to its supposedly disproportionate use against ethnic minorities.

He is now changing course on stop and search and seeking to increase its use “significantly”, following a surge in knife crime and London being crowned the world’s acid attack capital.

The mayor also recently admitted that around 200 former Islamic State fighters are at large in London and that most are not being monitored.

Months of headlines such as these culminated in Breitbart London editor-in-chief Raheem Kassam calling out the mayor for his long record of failures in an interview with Sky News which has gone viral, blasting: “To borrow a phrase from Donald Trump, London’s turning into a shithole under Sadiq Khan.”

London Mayor Sadiq Khan has said the police will “significantly increase” the use of stop and search powers to crackdown on knife crime.

The protestors at Khan’s speech told Sky News political correspondent Laura Bundock that politicians are “employed by us, the people” and “should do as we say”, but had “broken their oaths of office”. They also accused the Fabian Society which was hosting the mayor of “subverting” the constitution.”

Londoners elect a snarky Muslim As leader of their city and they are surprised when homicides are up 70% and acid attacks on beautiful young women are up about 90%? What did they expect? He belongs to a religion who’s ideology is a death cult. One doesn’t have to be a rocket scientist to figure this out, Just look at the rest of the Muslim majority nations.

When you elect a Muslim mayor, you get someone with a religious agenda for his cult, not the interest of the citizens. This is why it is good to see decent people rise up in a behaved way and take a stand. The Brits are waking up and taking their country back!

Editor’s Note: This particular story was popular at the time it originally made the news and is circulating again a second time for the important and applicable message that’s relevant today.

Video: Antifa Rioter Tries To Throws A Gas Canister At The Feds – He Gets Hit By A Less-Lethal Round In The Face As The Mob Drawback 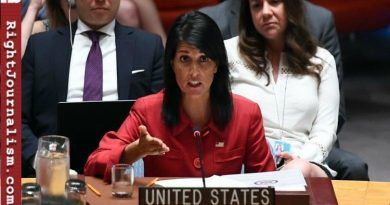 Nikki Haley Delivered Blunt Message To The UN That Left The Whole Room in SHOCK!

time for England to drain their swamp, too.

Yes. I agree. Time to stand, or you will fall.

It’s time for Great Britain to stand up for who they are and put the Islamic horde in there place. Tell the Islamic hoard that they are going home as soon as they can return home safely , they are guest not citizens.