President Donald Trump said Wednesday in South Korea that the ‘sinister regime’ to the North has become a dangerous menace, and warned North Korea’s dictator Kim Jong-un not to test his patience.

‘Today, I hope I speak not only for our countries, but for all civilized nations, when I say to the North: Do not underestimate us. And do not try us.’

Addressing a global audience, he insisted that ‘the world cannot tolerate the menace of a rogue regime that threatens it with nuclear devastation.’

‘All responsible nations must join forces to isolate the brutal regime of North Korea – to deny it any form of support, supply, or acceptance.’

In a long soliloquy about North Korea, he said the totalitarian state is the result of ‘a tragic experiment in the laboratory of history … in which leaders imprison their people under the banner of fascism and oppression.’

It’s ‘a country ruled like a cult,’ he said, fueled by ‘a deranged belief in the ruler’s destiny.’

And in a stern, direct message to Kim, he declared: ‘The weapons you are acquiring are not making you safer. They are putting your regime in grave danger.

Every step you take down this dark path increases the peril you face.’
‘North Korea is not the paradise your grandfather envisioned, he said of the nation’s founder Kim Il-sung. ‘It is a hell that no person deserves.’

Before he delivered his powerful speech to South Korean lawmakers revolving around the topic of the ever-growing nuclear and security threat of North Korea and its war-crazed dictator Kim Jong Un.

One thing was drastically different, however – instead of following his usual standpoint on the entire issue with his harsh take on the situation urging the people to unleash “fire and fury,” and “totally destroy” North Korea, if necessary, the U.S. commander-in-chief seemed calmer and softened up on his rhetoric.

Not long before the speech was scheduled to begin, President Trump scrapped a last-minute attempt to visit the demilitarized zone between North Korea and South Korea as a result of poor weather, however, the president’s team still flew and nearly reached the DMZ, before returning to Seoul as a result of a bad fog.

The POTUS also took this as an opportunity to spread the wonderful upcoming speech on Twitter, where he revealed that after his speech, he will be headed to China, where he looks forward to meeting with President Xi Jinping.

Getting ready to make a major speech to the National Assembly here in South Korea, then will be headed to China where I very much look forward to meeting with President Xi who is just off his great political victory.

But one quite astonishing thing happened as soon as the speech started. To be more specific, it all started out with President Trump receiving a huge sign of respect from the officials – a standing ovation.

A standing ovation as Pres and Mrs Trump enter the Assembly chamber. pic.twitter.com/cBxz7qlVsM

And just as he took the stage, the translator introduced President Trump as “the leader of the world,” which has a powerful meaning all by itself.

Pres Trump introduced – by way of translator – as “the leader of the world.” pic.twitter.com/vejZ8LxjyF

Thisis what President Trump means to the world he is a real leader! 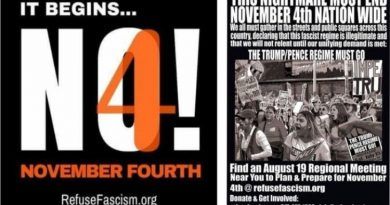 CBS, ABC & NBC–All Regulated By The FCC–Are NOT Giving Equal Time To Trump’s Defense Team As They Did To The Dem Prosecutors Last Week