Confiscation by the government of personal property without due process – should make an interesting SCOTUS case. And a clear violation of the 2nd amendment.

The state of Massachusetts is banning bump-fire stocks and ordering their confiscation under threat of heavy fines and imprisonment. Massachusetts is ordering residents to surrender any bump stocks in their possession, making clear that even keeping such an accessory at home is prohibited.

Massachusetts is the first state to ban bump stock as a response to the October 1, 2017, Las Vegas shooting.

The ban is based on language in a new spending bill containing sections directly referencing bump stocks and trigger cranks.

The bill defines a bump stock as “any device for a weapon that increases the rate of fire achievable with such weapon by using energy from the recoil of the weapon to generate a reciprocating action that facilitates repeated activation of the trigger.” It defines a trigger crank as “any device to be attached to a weapon that repeatedly activates the trigger of the weapon through the use of a lever or other part that is turned in a circular motion; provided, however, that ‘trigger crank’ shall not include any weapon initially designed and manufactured to fire through the use of a crank or lever.”

A letter being sent by the Massachusetts’ Executive Office of Public Safety and Security says:

Effective 90 days from the enactment of the bill—February 1, 2018—the new law will also prohibit possession of bump stocks or trigger cranks, including possession in a private home. There are no exceptions to this prohibition for licensed firearm owners: an FID card, a License to Carry, or even a license to possess a machine gun will not authorize possession of a bump stock or a trigger crank.

Because the law does not allow for transfer or sale of these prohibited items, if you currently possess a bump stock or trigger crank within the Commonwealth of Massachusetts you should contact your local police department or the Massachusetts State Police to get details about how to transfer custody of the prohibited item to the police for destruction. Retention of such a prohibited item beyond the 90 day grace period will expose the owner to criminal prosecution.”

So when a criminal breaks into your house in the middle of the night and he’s armed and you end up shooting him. They will probably come in and search your house for extra ammunition. When they find it they will confiscate it and throw you in jail. You end up being the bad guy.

And this is just the beginning…

The truth is- Democrats are using Las Vegas massacre for political propaganda. It is clear that the Democrats see this tragedy as an “opportunity” to promote their political ideology. They will keep using any reason to take control of Our Right to bear arms and will not stop until they do.

Tragedy comes in many forms however in most cases it’s the person causing the tragedy. Let’s use common sense and not a knee-jerk reaction. 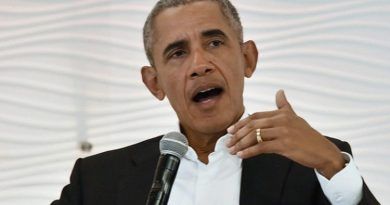 JUST IN! Black MSNBC Panelist Says The Most Outrageous Thing About the White People on Live TV (Video)

I do not believe that Vagus shootin was carried out by the man they say did it,and i think you should test that law,you should start organizing now to defend anyone arrested for that.