Michelle is the real racist, along with Barrack, and their 8 years of corruption and anti-Constitutional illegal actions. The real reason for the racial divide U.S.A. has been experiencing since their reign!

I don’t know why, but she needs a job other than bothering us crying because she is no longer as important as she always thought she was.

Today she went on racist attack against the Republican party!

She said the color and gender dichotomy in Congress was particularly noticeable when she attended State of the Union addresses.

“On one side of the room, it’s literally gray and white. Literally, that’s the color palette on one side of the room,” Obama said. “On the other side of the room, there are yellows and blues and whites and greens. Physically, there’s a difference in color, in the tone. Because one side: all men, all white. On the other side: some women, some people of color.”
She said she would see that and think “no wonder people don’t trust politics.”
“We’re not even noticing what these rooms look like,” she said, adding that the problem of underrepresentation isn’t limited to the political world.
“Until we are ready to fight for that – which means some people have to be willing to give up their seats to make room, or you need to be ready to add more seats – I think we’re going to continue to struggle,” she said.
Watch her remarks below:

Former FLOTUS Michelle Obama: The root of all problems are "All white man". pic.twitter.com/RuhSxHu3Ov

And they wonder why they lost the elections. Everything is racist! 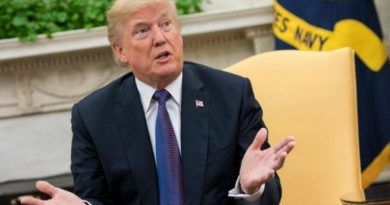 After Giuliani Revealed That Trump Paid Cohen $130K For Stormy Daniels, The President Responded And Made Things Clear (Video)

UPDATE! Schumer Rejects GOP Proposal to Keep Families Together at Border… Says He “Wants to Keep Focus on Trump”

People don’t trust politics bcz of people like her and her husband. They make it all about racism. They represent the era of non accountibility and incompetence. Keep playing the race card and see how they do in 2018.

Seems like when Obama was President most of his cabinet contained a majority of Muslim Brotherhood members. You are gone now, you and Hillary just can’t seem to accept that.

Why don’t you move to Africa where you would be happy??? All around you would be black, the only color you seem to trust!!!

We do NOT trust politicians because;
1. They rule like dictators! Your husband specifically!
2. They allow their wives to live LAVISHLY at the expense of the taxpayers! Your husband specifically!
3. They allow their daughter and a bunch of her BF go on Spring Break to Mexico, kitchen staff, secret service personnel, and many more personnel and then take 3 floors of the resort, 2 planes, etc all AGAIN at the expense of the taxpayers! Your husband specifically!
4. They allow their BIMBO wife to make political statements as if her opinion warranted merit. Your husband specifically!
5. AND I want to go on record that you Michelle Obama have made many asinine statements, but your most egregious was when you said if I did not vote for HRC that I was throwing away my vote.
What a stupid statements on the very face of what you said.
As a woman, a citizen, an adult; I have the right to analyze the information and make the most RESPONSIBLE decision on my PERSONAL evaluation for who receives MY VOTE! That is USING MY VOICE you imbecile!
Just because I am a woman, does not mean I should vote for a liar, a criminal, a traitor, or a person that has proven they personally DO NOT STAND for the RIGHTS of WOMEN! Just because HRC has/had a uterus does not entitle her to my VOTE….THAT IS MY RIGHT TO EXERCISE MY VOICE. Not the voice of the hollywood elitists and other non thinking left wing parrots and certainly not the VOICE of a radical, racially prejudice EX_FLOTUS like you.
Sweetheart when you stood repeatedly, in front of the FLAG of the UNITED STATES of AMERICA with a sneer on your face & no hand on your heart, you showed who and what you really were.

As my mother used to say, “Real Class always shows and so does the LACK THEREOF!”

Racism was brought to the surface because the Obama’s would cry racist when they didn’t get what they wanted. They basically gave the rioters the green light to destroy people’s property including an office building and vehicles. The Obamas continue to act like they’re still in charge. They continue to cry racist for everything. There is racism but I see it on both whites and blacks. Look at what’s become of the NFL. Black players raising their fist when they tackled white players. The racism is everywhere and we have the Obama’s feed fuel to the fire.

Okay, that nailed it.

If there are not enough people of color or women, why is that. 51% of Americans are women, that should get any women a majority of the votes in a Presidential election if all women voted only for her. oh wait, that would mean that all women are sheep and cannot think for themselves. Why do the blacks and Spanish decent people vote for white men, maybe they are free thinkers as well.

How about you can only vote for people of the same gender and color as themselves, that is what Michelle really wants – but wait, the blacks would still hold a minority in the Congress anyway.