Biden and first lady Jill Biden, both wearing black and with sunglasses on, arrived in south Texas on Sunday morning to visit the informal memorial to the 19 children and two teachers who were killed last Tuesday by an 18-year-old local man who strode into the school behind with an assault rifle.

Texas Republican Governor Greg Abbott was also in Uvalde on Sunday and has talked about greater security for schools, not about restrictions on guns.

Some who had gathered shouted both to him and the Democratic president, who is in favor of greater gun control, that they want action after another school tragedy, although the full questions they were calling out were not immediately fully audible to the media being held at bay.

The Bidens walked slowly down the long line of photographs of the children before being whisked away in the presidential motorcade to attend mass at the local Catholic church, without making any public comments.

There were some leftist interlopers in the crowd that weren’t successful in hiding the anger toward the political community by the Uvalde community.

They asked Biden’s help as he was leaving:

After attending mass Biden was suppose to walk over to the crowd of locals waiting for him but did not meet with locals after chants broke out , "Do something!" #Uvalde
Biden is now headed to meet with the families of the victims

People had a few signs that show what is the real problem down there:

Uvalde local down the street from where Biden is attending mass says he needs to visit the border and address the issue. She tells me that the local resources in Uvalde are used up in dealing with migrants pic.twitter.com/wmStxBMV7b

'Do not turn our tradegy into a political movement for you' says sign outside a #Uvalde home pic.twitter.com/C0hqh2ll3L

Rules for the, but NOT FOR ME said Drew Hernandez today:

There are blocks and blocks of armed law enforcement securing area

Gun control for you, but not for them pic.twitter.com/b3ibqdrMaS

Police line set up outside the church where President Biden is attending Mass in Uvalde Texas pic.twitter.com/XF1cmdxEoM

"Let's get the facts first before getting people angry, we need to Unify" says Nicole Ogburan, victim of Uvalde school shooting, where she is a teacher.

She had a message for President Biden and the Media which she shared with us.

"We need to stop putting each other down" pic.twitter.com/UtDumzEYzT

Since the Texas school shooting, Republicans have focused their messaging on school security, while Democrats are advocating for more gun control.

Texas Gov. Greg Abbott (R) on Friday said he expects new laws to be enacted in response the shooting this week that killed 21 people at an elementary school.

“Do we expect any laws to come out of this devastating crime? The answer is yes. Absolutely yes,” Abbott said.

When asked about calling a special session for the legislature in response to the shooting, he said “all options are on the table.”

When pressed further on measures Texas could see, Abbott focused on mental health and school safety.

Their Texas visit came as the Department of Justice said on Sunday it will conduct a critical incident review of the law enforcement response in Uvalde, where a large group of armed police waited for at least an hour outside the classroom where the gunman had barricaded himself and was killing those inside. 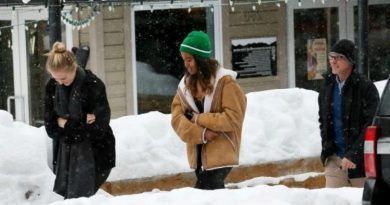 Malia Obama Just Went After Ivanka,President Trump & Every Member Of His Administration, Here’s How! (Video)

Which new law would have stopped the Ramos scumbag ?

Create a lawless society, do not punish lawbreakers, let lawlessness fester, and when it gets to a point where people feel hopeless, come back with a “solution”. It’s one of the oldest tricks in the book. Democrats have used it to great effect. Of course it didn’t help that Conservatives were cowards in the corner.

The coward cops didn’t want to save the kids, who had a long ahead of them , but they sure did want to protect an old demented geezer and his POS wife.

“One Nation Under God.” That’s the biggest problem, we are no longer one nation under God. More like one nation under humanism. When people turn away from God, God cannot bless and help them. He could but it’s not in His character because it would violate your freedom of choice and He won’t force Himself on you. You must willingly follow Him. So, like the fall of Jerusalem to the Babylonians in the time of Daniel, God warned them, they ignored the warning and He simply removed His hand that had been protecting then and they were destroyed and taken as slaves to Babylon. We too have been warned but most don’t hear and believe.

Now I do have a comment. What is San Antonio PD doing in Uvalde Texas when San Antonio is about 83 miles away with a driving time of an hour and a half?

Also, what a slap in the face for Border Patrol who actually stopped the problem because the Uvalde police were apparently inadequately trained. Par for the course with Biden and Liberals.

I also hear they are planning on tearing down the school and building another at Federal expense using tax dollars paid by all citizens of the US instead of the local school district. Funny, these school districts can spend $70 million on sports arenas and fields but can’t invest in security and security policies that work. Why should citizens from Maine or Washington State build schools in South Texas when they have schools of their own that need to be improved in their own states?

Every time you post it says “Waiting for approval”. I think I’ve had enough of this website.

Still people not talking about the transport plane that arrived but left just before before the perp was killed. Who was on the plane? Texas Department of Public Safety? Federal Marshall’s? The people that stopped true heroes from going in the school. I’m really surprised that Bidet showed up for this. The governor also had no reason to be there since he’s not talking about any of this either.

Last edited 6 months ago by Billy Back
1
Reply

If the border patrol cop who supposedly stopped the killing was actually getting a haircut when his wife texted him, why did it take almost an hour to kill the perp? He is supposed to have done the same thing that the other “cops” were doing. Taking their own kids out of the school before confronting the killer.

For Biden to even walk inside of a Catholic Church is a complete sacrilege. He is a disciple of Satan, through and through. He is nothing but pure evil.

Billy back
Reply to  Bluto

It took seven days to get an approval for “those” comments? Probably won’t be anymore.