A crowd of protesters gathered once again in downtown Portland on Saturday night.

The group first met at South Blocks before marching to the Justice Center. Eventually, the group marched to the city hall.

Antifa/BLM looted Starbucks and smashed up its windows.
After walking to Portland State, they have smashed up a Chipotle. The Antifa-approved press are not recording the acts of vandalism but luckily we have a video of the vandalism that occurred at Starbucks.
Video below:

Antifa are smashing up a Starbucks in downtown Portland tonight. #PortlandRiots pic.twitter.com/9nft4RoXtf

People at Friday’s protest reported tear gas was used to disperse the crowds.

Saturday, Wheeler said in a statement, “The Portland Police complied with the ban on tear gas while still providing mutual aid. I call on everyone in our community to step up and end the violence and to focus on advancing racial justice.”

During the Saturday’s riots, there was no evidence of tear gas being used on the rioters and the police presence was low.

The rioters used this occasion and decided to force people to follow their rules and laws.

In one situation they forced people to give the black power salute & chant, “Black Lives Matter” so that tyhey can pass the street unharmed.

BLM-antifa in Portland took over the street outside the central police precinct after smashing up businesses. They’ve blocked the road for hours. They make the passenger of this car give the black power salute & chant, “Black Lives Matter.” #PortlandaRiots pic.twitter.com/YHljeAAnQ3

Driver should have used the Black Power of his accelerator pedalbut he decided to cave in to teir demands.

It seems that the “Antifa/BLM warlords” weren’t satisfaied with the salute and smashed the truck anyway.

The truck was smashed up later. #PortlandRiots #BLM #antifa pic.twitter.com/NZk8nzoLdE

Not a single arrest overnight (19–20 Sept.) in Portland as a large mob of BLM-antifa marched through downtown, smashing up businesses. They then held a street dance party in front of central precinct to celebrate how there were no cops. #PortlandRiots https://t.co/zLflASV1RW pic.twitter.com/XF6C1criYS


Your average American is not like the people in other countries. We are a young country. Our country was started by repeatedly making an extremely dangerous journey multiple times in a search for freedom. Our British overlords got a little rough and a little oppressive so we sent them packing. The west was dangerous. We thrived. Japan decided to get rough with us and we got rough back. Our history should tell people that the threat of violence is not an obstacle in America. The left is killing itself with these threats. The average American is not fond of bending the knee. They are creating a pushback. People who would not otherwise have a strong opinion are getting involved. This rioting and the threat of violence are pushing real Americans who sometimes tend toward the center to the right. All I can say is keep them coming. 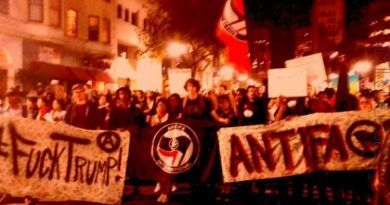 Antifa Planning Horrifying Nationwide Protests For Monday! Is Your City On The List?

Media Blackout – Kenosha BLM Speaker Openly Calling For A Race War: “If you kill one of us, its time for us to kill one of yours.”