20 years ago Joe Biden was a wise-cracking Democrat politician on top of his game. Whether you liked him or not, nobody could deny he had a way with words and knew how to work a crowd. Fast forward to now, however, and the picture is not so rosy when it comes to the former vice president’s cognitive health.

The latest developments have left many Americans demanding Joe Biden to take a mental health evaluation!

The real problem s that the Democrats knew about his mental decline almost a decade ago and still, they let him run for President!

A video from 2014 that our team found shows Obama as he laughs about Biden’s mental decline!

For many Biden supporters, their image of Biden is anchored in this time from the past. But compare the 2007 Biden with the Biden campaigning to run against Trump in 2020, as shown in the following video compilation, and even Biden supporters will have to admit he should undergo a mental health evaluation.

Biden is now nothing more than a third-rate crummy politician who should undergo a mental health evaluation.

For younger voters who don’t have much prior knowledge of Biden, it may be shocking to see the politician speak in clear and complete sentences in past videos.

Compared with footage taken during his current campaign for the Oval Office, it’s hard to believe Joe Biden is the man now being filmed.

Now, 14 years later and in his late 70s, Biden struggles at times with remembering the names of people interviewing him and even what states he’s in.

The sheer number of gaffes is remarkable, and a compilation of the missteps is the only way to truly grasp the scale and diversity of the candidate’s mistakes.

It’s impossible for the public to accurately tell what’s going on with Biden.

One possibility is that two terms as vice president have taken their toll on the politician, a problem that is only made worse by entering into the White House as President.

Video: Obama Says Mail-in Ballots Can Only Be Trusted If The Signatures Are Verified 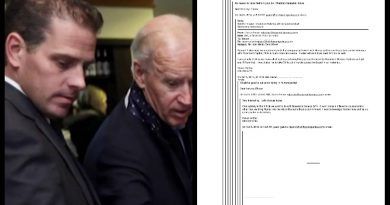 Photo: “Hunter Will Work If We Need Him To As Well” – The First Of The 26,740 Hunter Biden Emails Is Out And Exposes Operation Ketchup That Implicates John Kerry’s Stepson