Our fallen soldiers and veterans and their families should be treated with our utmost respect.

The suicide of our Vets is not a result of owning or not owning a gun. It is an issue of being neglected and depressed. Not receiving good care and support.

Veterans fought for and served this country… They above all else deserve to have a tremendous respect for all the citizens.

One company found a great way for a team to lose even more customers!

A Marine veteran who suffers from post-traumatic stress disorder said that his employer will not let him bring his service dog to work.

Yauncey Long worked in counterintelligence for the Marine Corps for more than a decade, serving in Iraq and Afghanistan. He earned a Purple Heart medal after being wounded in combat, reports Fox News.

While he says he is very proud of his service, Long now suffers from PTSD. Though he has used medication for the symptoms, he says the biggest help in dealing with his condition has been his service dog, C4.

Since getting C4, Long has been able to do things he was unable to do for a long time and has become less dependent on medication.

Now, Long is working for telecom company Cincinnati Bell, but there is one big problem — the company will not let him bring C4 to work with him. Though he explained to his employer that the service dog helps him function normally, he was told that if he brought the dog to work, he would be fired.

According to AllThatsNews, threatening to fire an employee for having a service dog is illegal, so Long brought C4 to work anyway.

The veteran said that the company has been treating his action “as if it was an option” rather than a necessity for him.

“The dog is really helping with my symptoms,” Long told Fox News. He added that C4 helped him be able to go grocery shopping independently for the first time since he was deployed

Long said that he wrote the CEO of Cincinnati Bell, Leigh Fox, about the problem. According to Long, Fox told him that he should speak to human resources about it again.

The company said in a statement to Fox News that it has not yet received information about Long’s condition or its “effect on the ability to perform his job.”

The veteran said that he has filed all of the necessary documentation to prove his PTSD and that he needs C4 to be with him at work.

Readers shared their thoughts on the story on the All That’s Fab Facebook page.

“This is horrible for a company to treat a veteran this way!” one reader commented. “Keep fighting this battle, I am sure you will win!”

“If he has a disability and requires a service dog it’s his right and the company can be sued for denying him,” another user wrote.

Please support our Military in becoming self-sufficient. Our country needs to support our service men and women.
It’s a shame that our veterans are been treated this way especially when he is covered the ADA law.

Muslim Girls Talk Back to Teachers, So State Takes Something They Treasure 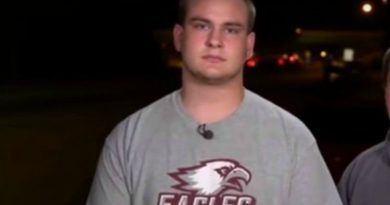