Many have been calling President Trump’s pick for the SCOTUS an “Extreme” pick, and someone who would shred the United States Constitution.
That’s the furthest from the truth, in reality.. the three feminists who sit on the court now are the ones who are extreme.

“It is a very inspiring time – that you have overthrown a dictator, and that you are striving to achieve a genuine democracy. So I think people in the United States are hoping that this transition will work and that there will genuinely be a government of, by, and for the people,” she said,

“I met with the head of the elections commission. I think that the first step has gone well, and that elections have been held for the lower house that everyone has considered to be free and fair. So that’s one milestone, and the next will be the drafting of a constitution,” she said.

“I can’t speak about what the Egyptian experience should be, because I’m operating under a rather old constitution.

“The United States, in comparison to Egypt, is a very new nation, and yet we have the oldest written constitution still in force in the world.

Supreme Court Justice Ruth Bader Ginsburg told an Egyptian TV station in 2012 that she would not recommend using the U.S. Constitution as a model for writing a modern-day constitution. pic.twitter.com/QxSIMoIMDA

“Let me say first that a constitution, as important as it is, will mean nothing unless the people are yearning for liberty and freedom. If the people don’t care, then the best constitution in the world won’t make any difference,” she added.

“So the spirit of liberty has to be in the population, and then the constitution – first, it should safeguard basic fundamental human rights, like our First Amendment, the right to speak freely, and to publish freely, without the government as a sensor.”

“You should certainly be aided by all the constitution-writing that has gone on since the end of World War II,” Ginsburg said. “I would not look to the U.S. Constitution if I were drafting a constitution in the year 2012.

“I might look at the constitution of South Africa. That was a deliberate attempt to have a fundamental instrument of government that embraced basic human rights, had an independent judiciary.

“It really is, I think, a great piece of work that was done. Much more recent than the U.S. Constitution — Canada has a Charter of Rights and Freedoms. It dates from 1982. You would almost certainly look at the European Convention on Human Rights. Yes, why not take advantage of what there is elsewhere in the world?”

The very foundation of this country is its Constitution. It has guided our nation for over 200 yrs. For a Supreme Court Justice to say this about our Constitution, is unconscionable. This woman swore on the bible to protect and preserve the constitution! She is in VIOLATION of her oath of office SHE SHOULD BE REMOVED!
These women do not belong on the court, and to our knowledge, these women are NOT constitutionalist.

The great Antonin Scalia was, in fact, the greatest Justice to ever sit on the bench.

His interpretation of the U.S Constitution was impeccable and truthful.

The Constitution that I interpret and apply is not living, but dead, or as I prefer to call it, enduring. It means, today, not what current society, much less the court, thinks it ought to mean, but what it meant when it was adopted -Antonin Scalia
Share this article if you agree! 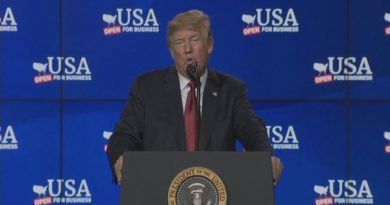 WHAT AN IDIOT , SHE IS . SHE HAS LOST ALL CREDIBILITY , SHE MUST RETIRE NOW.

Why was Ginsburg not fired for this speech?