Muslims living in America must finally realize that they can’t demand anything because they are in a new country now. That’s why they need to adapt and abide by our laws and customs. If they can’t then they are free to live…simple as that.

Today we have another situation that shouldn’t happened in our country!

According to The Christian Post, a worksheet in a homework packet handed to students “instructs students to practice calligraphy by copying the Arabic form of the Shahada by hand.” The Shahada “is the Islamic profession of faith that declares belief in one true God and Muhammad being a messenger of God.”

“I saw the assignment of writing the Shahada in Arabic. Their excuse was calligraphy,” the enraged father told The Christian Post. “I was like, ‘Whoa! Whoa! Whoa!’ First of all, calligraphy was invented in China 3,000 years prior to Muhammad. The fact that they were trying to get my daughter to write that disturbed me.'”

According to Brielle, the assignment was mandatory and she would receive a consequence if she left it uncompleted.

“I said, ‘That is not happening. My daughter is not doing that,'” Penkoski said. “My daughter told me that if she didn’t do the assignment then she was going to get a [detention] slip.”

Horrified over the assignment from Katherine Hinson, his daughter’s teacher, Mr. Penkoski immediately contacted the school’s principal, Ron Branch, who contends Hinson never actually assigned the work packet, but that it was “optional.”

“There were two calligraphy activities in the packet,” Branch wrote in an email. “One involving the Shahada and one that is just English letters in which the students can write whatever they want in calligraphy,” Branch explained. “The teacher told the students that they could do these activities if they wanted. I told Mr. Penkoski that the calligraphy activity was optional, but was not assigned. They are reading through the packet as part of the study. The teacher has told her class several times that this is a study of world religions and that she is not trying to advocate for any religion over another. She has told her class that if they had questions about religious beliefs, that those conversations should take place with their parents.”

Penkoski, citing past homework assignments concerning Christianity and Judaism, believes the school is merely backtracking and calling the work “optional” only in light of his complaint.

“Why would they print all that out and then tell them they don’t have to do it?” he asked. “When they were given a packet [on Christianity], which didn’t go into that much detail, they did have to write an essay. So you’re telling me they don’t have to do it now that I called you on it? It makes no sense and it is not consistent.”

“I am curious why the other ones were not optional and the Islamic one was optional,” he added. “It only seemed to be optional after I raised objection.”

Branch pushed back: “The units on Judaism and Christianity were about a week-and-a-half. Each of the other units should take about a week. Jesus was taught,” he claimed. “The students read the chapter in our textbook that discusses Christianity’s belief that Jesus is the Son of God, and salvation. They also discussed the Sermon on the Mount, the Last Supper and Jesus’ Betrayal, the Trinity, and the Lord’s Prayer, among other topics.”

In the packets on Christianity and Judaism there were “no Bible verses, no reciting the Ten Commandments or the Lord’s Prayer,” noted Penkoski. “[There’s] no practicing writing in Hebrew as compared to the Islamic packet.”

“It’s one thing to talk about secular, but they cross the line with Islam because they went from the secular aspect of it to the faith aspect of it,” he said. “Let’s be honest, if they had come home with the Lord’s Prayer, we would have atheists suing all over the place.”

My point is that even teaching religious texts in public school has nothing to do with separation. It is making your kid write a vow to a religion that is the issue. I think it is much more of a school should fire its teacher than a constitutional thing.

It’s (not) amazing that the US press is not reporting how government education systems are favoring particular “identity-groups” over others and certain religion over others.

Schools should not be judges of races, religions or any group of Americans, they should be reinforcing how Americans achieve greatness through unity not diversity.

United We Stand. Diversified, we are falling. 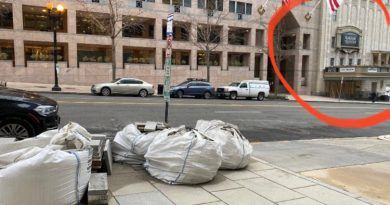 Photo: Stashes Of Bricks Are Being Found In DC Near Freedom Plaza – Officially They Are For Construction Work But Locals Say They Were Left There Over Night 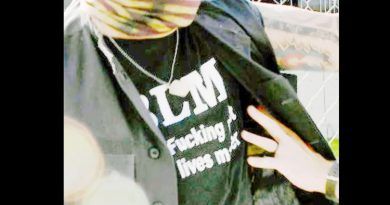 PENKOSKI COULD AND SHOULD BE DISMISSED, YOU CANNOT FORCE YOUR RELIGION OR BELIEFS ON THE STUDENTS, I WOULD NOT SUBMIT ANY THING BUT 1 THING ISLAM AND ALLAH IS A FALSE GOD, PENKOSKI CAN SMOKE THAT IN HER PIPE.

WRONG TOTALLY MUSLIMS ARE THE DEVIL, IF YOU DO NOT BELIEVE THAT ASK GOD WHAT HE THINKS.