On Wednesday, Roseanne actress Sandra Bernhard had an interview with MSNBC’s Ari Melber where she talked about her reprising her role as Nancy Bartlett Thomas on the reboot of popular sitcom ‘Roseanne’ and the role Trump plays in dividing the family. Among other, Bernhard said that she still can’t understand why women voted for President Trump and blamed Trump’s vote totals on women “giving in” to motherhood and not “being able to think for themselves.”

“Can’t understand it,” Bernhard said. “Don’t know where it comes from.”

But after a few seconds, she launched into a multi-part explanation.

“I think it’s a couple of issues. It’s being either under the thumb of your husband—for the election, it was being so offended by Hillary Clinton and Bill Clinton’s legacy that you turned on her,” she said.

“Or feeling inadequate, feeling like, ‘How can somebody be so educated? How could somebody have brought themselves up from their own experience and gone to the top—educated herself, fought for rights, civil rights, and equality?’ I think that’s threatening to a lot of women,” she added.

Melber asked what she meant by women feeling “threatened” by Hillary Clinton, and she located the problem in their feelings of inadequacy compared to her.

“A lot of women have compromised, given in, gotten married, raised their kids, and not had the luxury of being able to think for themselves,” Bernhard said.

She said making that “sacrifice” harms women and their ability to be validated through their own work. She said some women who supported Trump do work, but they can still have a degree of inadequacy.

“I’m not saying none of these women work, of course, they do, but there’s just those little gradations in how you look at other women and the sort of feeling of inadequacy,” she said.

Recently, former Democratic presidential candidate Hillary Clinton made similar comments. She told a packed audience at a conference that ‘white women’ overwhelmingly voted for Donald Trump simply because their husbands forced them to.

I’m amazed I can even formulate this sentence and type it all by myself. You know, since I’m a Trump supporter and all…

It is unfortunate that she attempts to project her ideals, in the same manner, that she ‘’accuse” the rest of America of doing. There seems to be a segment of Hollywood that is so blind and conceited, as to think that everyone should think the same way that they think.

She is another Hollywood liberal lunatic that can’t come to terms with why Hillary lost. Women saw Hillary for what she is a lying establishment narcissist consumed with money and power.

Luckily, nobody cares what Bernhard thinks! So, she can keep telling people who voted for Trump that they can’t think for themselves. 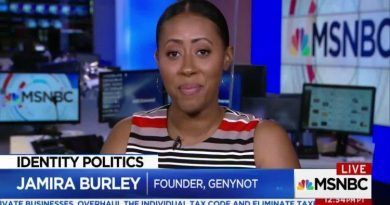 JUST IN! Black MSNBC Panelist Says The Most Outrageous Thing About the White People on Live TV (Video)

Watch! Sarah Sanders Shows No Mercy At MSNBC After They Asked Her If Trump Is a ‘Racist’