NFL players protest is a national sick joke !! They picked the wrong forum & manner on this issue. The national anthem & flag are honored at sporting events for veterans that served & gave their life for our country. NFL players abuse women & animals & yes there are some bad cops but Disrespecting Country. Vet’s & Flag is a dishonor, not a protest !! The right to protest does not make it right !!

About two months President Trump called for football fans to boycott N.F.L. games unless the league fires or suspends players who refuse to stand for the national anthem, saying that players must “stop disrespecting our flag and country.”

A Facebook group with more than 200,000 followers is planning an event to boycott all NFL games over Veterans Day weekend in response to what they perceive as disrespect to the American flag and national anthem.

It seems that there are signs of change!

From Fox News:
In the eight 1 p.m. ET games on Sunday, no players were observed kneeling during the national anthem.

The NFL players’ union previously said its members planned to observe a moment of silence for veterans at Sunday’s games, while various teams planned other Veterans Day tributes, the Washington Times reported.

“I will say this right now … you saved my life.”@VetsandPlayers is a team that changes — and saves — lives.#SaluteToService pic.twitter.com/tB5fZmRjij

The Atlanta Falcons said each of their players would be wearing the initials of a fallen service member on a special helmet decal.

It’s bigger than us.

Today, each of our players will be wearing the initials of a Fallen Hero on a special helmet decal.#SaluteToService pic.twitter.com/VeqgVqqDeu

.@J_No24 giving the cleats off his feet to the Commandant of the Marine Corps General Robert B. Neller. #SaluteToService @RedskinsSalute pic.twitter.com/IUGfZlsbFL

Titans receiver Rishard Matthews walked onto the field holding hands with soldiers and stood with teammates for the anthem for the first time since President Donald Trump criticized players for protesting.

On Thursday night, all of the players with the Seattle Seahawks stood during the national anthem as part of the NFL’s Salute to Service before playing the Arizona Cardinals, Q13 Fox reported.

The team had several members of the defensive line sit during the national anthem in the past couple of weeks.

Michael Bennett told NBC he stood for the Anthem tonight in advance of Veterans Day to make it clear he supports the military, Mike Tirico just said on the broadcast.

Michael Bennett, who was the first Seahawk to sit on the bench in the preseason, told NBC he did so in advance of Veterans Day, to make it clear he respects the military.

The league and its player’s union announced Saturday there would be “no change” in league policy regarding the on-field protests, which began last season with a one-man effort by former San Francisco 49ers quarterback Colin Kaepernick, who said he wanted to draw attention to police mistreatment of African-Americans across the U.S.

This would be a GREAT day to let the NFL know EXACTLY how important respect for the National anthem and the Flag are to Veterans and the people who love Veterans. So important that we will not participate in their two-faced attempt to “honor” Veterans one day while disrespecting us/them every other game day.

So keep boycotting. We may not see this year the big dip in ticket sales, but the proof is when you carry out boycotts for the long haul. 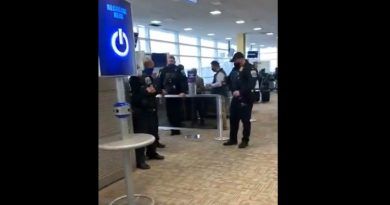 Video: A Whole Plane Of Trump Supporters Allegedly Kicked Off A Flight For Singing The National Anthem

PERSONALLY FOR
ME , I will never watch any NFL the rest of my life. And I would love to see the NFL go BANKRUPT !! Those CRYBABIES don’t know how to ACT , TALK , or know how to deal with MONEY ! They think that because they are on television and people wear shirts with their name on the back , that they should be allowed to break the law and reap no repercussion . Most are CRIMINALS in one way or another !!

It was the job of the NFL to honor the Bi-laws n Contracts by ensuring that all players honor theirs. Allowing political grandstand , regardless of the reason is a blatant violation of NFL by-laws! You failed to lead, you failed the fans, you dishonored our country, and you disrespected our Military . If you can fire Tim Tebow n Colin Kaepernick then you are obligated n bound to fire the rest. The coach that forced an Army ranger to hold a press conference to apologize not only violated NFL by-laws but infringed on the Constitutional rights of an American citizen! He should be fired n ban from the league but still you fail to act!! The NFL was a place we could all go to get away from all of the political garbage , one of the things that unites us but you failed in your duty. Kneeling with them, holding hands is still a breach of duty. Thanks for ruining the season n seasons to come if you do not rectify the situation!!!

Too little way too late!

Sorry to late nothing right now would have me watch or hear anything about NFL my protest is until the end of the season how about yoy.

The American people do not expect much from politicians, but the NFL they have grown up admiring! 1day a week is not too much to ask for no politics on the Field!

I ABSOLUTELY agree!!! Boycott them across the Nation until this completely stops for good!!! Who do they think they are to try to hold America “HOSTAGE”, threatening not to honor our Anthem and Flag if we don’t comply with their demands? Mmmmm let me see? How many NFL players are there? And how many people are there in America!! Especially how many watch the NFL games by either attending, on TV, radio, and purchase memorabilia??? I believe we “outnumber them tremendously!!!! We have to be stronger and HURT THEIR WALLETS, Owners, Coaches Staff, and mostly players!!! They WILL STOP I ASSURE YOU WHEN IT HURTS THEIR MONEY LONG ENOUGH!!!!9

To little to late

they can do what they want. but I do not have to support them

It would be nice to think they did it for the Veterans. They didn’t. The NFL is in real financial trouble. This is called ‘smiling for the camera” while using profanity. Tomorrow it will all return to it’s regular routine of low life behavior. They are forever scared with the image of dis-respectfulness, because we will never forgive them dishonoring our veterans in the first place. There choice, they can wear that scarlet letter, there can tear it off, but the stitch marks will always show. We don’t have to forgive them, We don’t have to be kind to them, We don’t have to accept that rudeness. and most of all we don’t have to financially support them. They are fading their own reality that it’s hard to draw a paycheck when you don’t have a job. Just ask a Vet who was lucky enough to come home, but not always whole. We call them Hero’s for their courage, outstanding achievements, noble qualities and their scarifies. Being able to pretend to pee like a dog on a football field to show their vulgarity towards our Veterans will never be anyone’s hero at least never one of mine…… Bad dog, BAD, bad, dog!

I will keep boycotting the NFL, I am not fooled by their half ass attempt to lie their way back into America’s good grace. They disgust me with their lack of understanding, their lack of honor, and their lack of courage. I truly believe they have with their greed, killed the sport.

Seriously! Can’t you people get over this, shut off the NFL… don’t watch it and end the league!!!° Pretty simple quit talking and do something you don’t need the NFL!!!!!! YOU will live without it.