Former First Lady Michelle Obama used a vicious parenting metaphor while speaking at the Simmons Leadership Conference in Boston, to mock president Trump. Michelle said that compared to President Trump, her husband was “the good parent.”

My husband, Barack Obama, was “like having the ‘good parent’ at home. The responsible parent, the one who told you to eat your carrots and go to bed on time,” the former first lady said.

Referring to Trump, she said: “And now we have the other parent. We thought it’d feel fun — maybe it feels fun for now because we can eat candy all day and stay up late and not follow the rules.”

Obama also reiterated that she has no desire to run for president in 2020.

“I think people should be less … disheartened that me and Oprah don’t want to run, and more disheartened by the fact that Hillary Clinton, probably the most qualified person to ever seek the office of the presidency, lost. She lost. The reason why I don’t want to run for president — I can’t speak for Oprah, but my sense is that first of all, you have to want the job,” she said.

“And you can’t just say, ‘You’re a woman. Run.’ And we can’t look for women like that. We can’t just say ‘let’s find the women we like and ask them to do it,’ because there are a million women who are inclined and who do have the passion for politics,” she added.

Of Hillary Clinton, Obama said: “She wasn’t perfect, but she was way more perfect than many of the alternatives.”

Michelle’s defense of Hillary Clinton defense is laughable. It was Clinton’s arrogance thinking that she had a clear, easy win over Trump that led to her downfall. To use the excuse that it was because she was a woman is disingenuous.

But, let’s think about the analogy of the good parent (former President Obama) and the bad parent (President Trump). My elected officials are not my parents. I don’t need to be told what to eat, what media I should listen to, how I should vote etc. That is so insulting I’m having trouble putting it into words. I’m an adult perfectly capable of making my own decisions and running my life.

This parenting analogy is what is wrong with govt. I don’t need a nanny state. Her husband, Mr good parent president took the credit card and went crazy and stuck me and all taxpayers with the bill. The good parent spied on the press, on American citizens, weaponized the IRS for political purposes, ran guns into Mexico (some of which were used to kill Americans), destroyed Healthcare for millions of Americans. I don’t call that good parenting, its child abuse.

Shut up, Michelle. We are sick of listening to your verbal excuses. Blank off.

More Winning! Trump Tweets out “5 for 5” After Tuesday Primaries 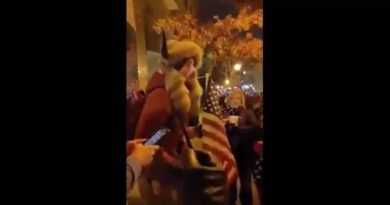 Patriot Confronts Muslim Men Accused of Raping Underage Girls, Some as Young as 11… Watch What Happens Next!