It is a well-known fact that actress and singer Barbra Streisand was not looking forward to a Trump presidency. Streisand has long criticized President Trump, starting last August when she became one of many celebrities to say they vow to leave the country if Trump won the election.

Collusion or no collusion, @realDonaldTrump should be impeached for sheer stupidity.

NO. Stupidity is tweeting for an elected official to be removed based on a personality conflict and no indication of any crime committed. Like your savior Obama said: “Elections have consequences.”

Babs wastes a tweet, ensuring no sane person listens to her again. It’s such fun when entertainers become experts on the Constitution. They are experts in just about anything for that matter…

However, she immediately received brutal critics from the Twitter community!

Singing or no singing @BarbraStreisand should be mocked for failing constitutional basics 101. https://t.co/EeFKkiYtOb

Because that's how the Constitution works. Good for you Babs……. https://t.co/mqk3LaSaOf

I can think of a lot of Oscars, Emmy’s, Tony’s and Grammy’s that should be recalled due to sheer stupidity of the recipient. Particularly this one: 👇🏻 https://t.co/f4KtzLsOQA

This is a pretty solid sign that democrats are giving up on the Trump Campaign/Russia Collusion fantasy. https://t.co/qdWc8Ha1G8

Barbara has Trump Derangement Syndrome. She can call for Trump’s impeachment all she wants, but the positive changes he is making for this country are very real.

What is it with these actresses, actors, and athletes that makes them so intolerable and ignorant? They are in complete disarray. No idea on what to throw at the wall and hope it sticks. They watch their options slipping at a rate they can’t keep up with. An insurance policy or not, POTUS will remain in Office. 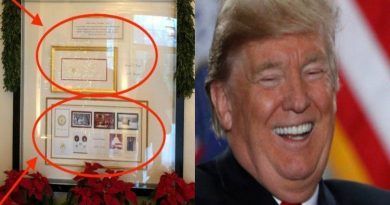 How about this. Barbra Streisand should learn the procedure for impeachment rather than rattle off her liberal tongue about Pres. Trump should be impeached for stupidity. Someone who obviously does not know know much about the US Constitution procedures for impeachment is just as stupid. Thus the old adage Stupid is as stupid does. To blame him for her getting fat, she does not look fat to me in pictures I have seen. When any of us uses the emotional side of the brain this can get us into serious trouble and embarrasment. She has not left the USA yet so life for her cannot be that bad. Remember George Clooney said he would leave and he did but he came back claiming our nation was safer. So far no celebrity or athlete claiming that they would leave if Pres. Trump did get elected would leave certainly has not taken up perm. residency elsewhere. Plus if any of them did we would not be loosing much at all! Ever hear a conservative say when Obama got the presidency that they would leave our Nation, I have not. Ignorance can be bliss!

I am thinking of buying this drop-dead gorgeous Yandy Mixed Up Bodysuit from https://www.theroot.com/sisters-making-waves-with-their-swimsuit-designs-1790860404! Is it a reputable boutique?