Everybody knows that Colin Kaepernick’s polarizing decision to protest the national anthem was a stupid thing to do! Honoring and respect the flag of our nation is also paying respect for those who paid the ultimate sacrifice to keep of nation safe and free.

But, if some of you still had a little respect for Colin Kaepernick, I am sure you will now lose it all after you hear what did he say now! Free-agent quarterback Colin Kaepernick told CBS that he would stand for the national anthem if he is given another opportunity to play in the NFL.

He spoke off camera with the network and said he will go anywhere to work out with an NFL team and just wants to be judged as a football player. His agent has reportedly reached out to all 32 teams across the league to discuss his availability.

“His sole focus right now is on being a quarterback,” CBS correspondent Jason La Canfora said. “He’s just looking for an opportunity.”

After sitting down with Colin Kaepernick for several hours, @JasonLaCanfora says the QB is still actively trying to play in the NFL. pic.twitter.com/R9qTIZ7EQl

Well, there is nothing like standing up for your beliefs!

America's oppressive until you need a job. https://t.co/6jiXht931m

Kaepernick said he can't stand for a country that mistreats minorities. So what changed? lol https://t.co/HTOTpDLif6

Is it all about the money? All of the kneelers are millionaires but not much longer! Football will be done! So he took a knee to protest and in his words not honor a racist country. What changed now? Perhaps the amount of money in his bank account?

So much for believing in your cause. Makes the rest of the protesters look pretty stupid if he is now just wanting a paycheck and will stand. What a hypocrite.

Too late and too little Kap. You should have thought of that before you disrespected America. I don’t see any apology to the veterans about not respecting our anthem, flag, country.

What do you think? Share if you think that Kaepernick should remain unemployed!

President Trump Blames Obama For Many Of The White House Leaks 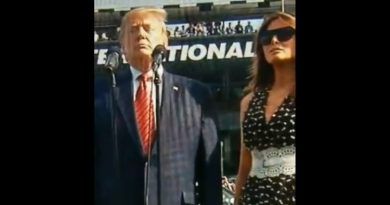 Video: Crowd Erupts As President Trump Gives The Command For Drivers At The Daytona 500 To Start Their Engines

After all the trouble that fool started and thinking,Boo Hoo,I need a job,he should have thought of that before he pulled his stunt. NOW,he’s afraid of loosing his millions. You made your bed,now lay in it. No one to blame but yourself. Diana

Way too late! You caused a whole lot of trouble and lost $$$ for lots of people and companies, especially the N F L. Adious!

Shouldn’t be allowed to play standing or not.

Kaepernick was given the opportunity to play professional football earning millions of dollars which he squandered by making a bad decision. And now feeling the pinch monetarily, he’s willing, or so he say’s to conform to standing for the National Anthem…how quaint. Kaepernick’s irrational decision has cost him and the National Football League (NFL) dearly and he’s just now discovering the magnitude of the error. It’s only natural he will say anything in order to be reinstated into the (NFL) and really, what type of guarantee can Kaepernick offer to assure team owners, management, staff and fans that he will no longer cause disruption to the game…”NONE”. Let’s face it…Kaepernick is a grown, mature individual responsible for “His” actions and is not willing to accept that fact. He’s a mediocre quarterback who envisions himself the finest the NFL has to offer. And it’s really sad, truly sad that ego and militant Black Nationalism has veered him away from such a lucrative career. I truly believe Kaepernick will not change his way of protesting, contrary, I believe it will get worse before it gets better. Hopefully the fans and NFL owners will see through this façade for what it is and not reinstate him to the NFL.

So how does this sit with his fellow idiots (teammates) that thought he was fighting injustice? Give me a paycheck and we can be friends again? Screw this punk.

If I owned a NFL team there would be no way I would hire him! He started this whole mess and look at the ratings the NFL is receiving now. He has no respect for the men and women who sacrificed their lives so he could play in the NFL and make potentially millions of dollars. He needs to find another career, if anyone in their right mind would even hire him!

Oliver’s used tires has an opening for a tire changer starts at minimal but he can work his way up!

Dumb mistake…. Facing poverty…. If a millionaire can be in poverty… He is just visualizing the end of the gravy train… So now he wants to change… Heard this story before… Get a real job