The entire border needs a wall. Without the entire border walled, the illegal invaders can come through the unwalled areas and, once here, have the freedom of movement throughout the rest of the lower 48 states.

But also the detention centers are not something that solves the problems.

The Democrats and the MSM have no shame. With every passing day, we see more and more evidence of their hypocrisy, intellectual dishonesty, and evil behavior.

Remember when the liberal media shared a touching photo of the little girl Yanela Denise, crying as a U.S. Border Patrol agent patted down her mother. The picture became a symbol of the families pulled apart by the Trump administration’s “zero tolerance” policy at the border, even landing on the new cover of Time magazine. The image was photoshopped as if she was confronting President Donald Trump, staring down at her as if terminally uncaring about her plight.

The story proved to be fake as the girl’s father told The Washington Post that his child and her mother were not separated.

Things didn’t calm after that as a lawsuit emerged against the border patrol of the U.S.

According to KFVS aU.S. judge in Arizona has issued a permanent order requiring the Border Patrol to provide clean mats and thin blankets to migrants within 12 hours of arriving at a detention facility.

The order issued on Wednesday also bars the agency from holding migrants more than 48 hours if they’ve been fully processed.

It applies only to eight Border Patrol stations in Arizona following a lawsuit that claims the agency holds migrants in overcrowded, unsafe and inhumane conditions.

In his 40-page decision, U.S. District Judge David C. Bury ruled the conditions at the sector’s eight stations are “presumptively punitive and violate the Constitution,” and he blocked Border Patrol and parent agency U.S. Customs and Border Protection from holding people who have been processed by agents for more than 48 hours from “book-in time.”

“Detention may not extend into a third night under the ‘no longer than 48 hours’ rule until CBP can provide conditions of confinement that meet detainees’ basic human needs for sleeping in a bed with a blanket, a shower, food that meets acceptable dietary standards, potable water, and medical assessment performed by a medical professional,” he said.

The Border Patrol says its facilities were designed for adults and short-term stays.

The sad part is that the liberals don’t care about the truth. They would rather believe a lie that maligns conservatives than the truth.

Also, these so-called judges that are protecting the liberal agenda need to be replaced ASAP. 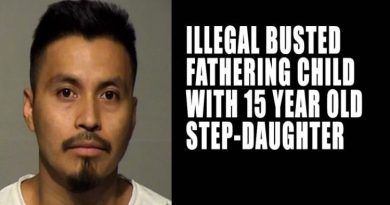 An Illegal Alien Has Been Accused For Raping And Impregnating Stepdaughter to Have ‘Anchor Baby’ So That He Can Prevent Deportation!