Great Mike Ditka appeared on Westwood One’s Monday Night Football pregame show with Jim Gray where he revealed how he really feels about this National Anthem fiasco! He said the truth so well..loud and clear! Everyone should read his words about our country and the way pro football is going!

Ditka said: “All of a sudden, it’s become a big deal now, about oppression. There has been no oppression in the last 100 years that I know of. Now maybe I’m not watching it as carefully as other people.”

Ditka called players to protest when the game’s over in any other way they want to. He also said he would bench players who insisted on demonstrating during the anthem because it’s disrespectful.

Ditka is right! Our flag stands for justice. There’s a reason our nation still stands as a beacon of Justice. It’s our constitution, flag and country. We’re not perfect but our flag ensures that any injustice in our country will eventually be eradicated. Stop disrespecting the one and only symbol of Justice for all.

“I don’t know what social injustices have been,” Ditka said. “Muhammad Ali rose to the top. Jesse Owens is one of the classiest individuals that ever lived. I mean, you can say, ‘Are you (saying) everything is based on color?’ I don’t see it that way. I think that you have to be color blind in this country. You’ve got to look at a person for what he is and what he stands for and how he produces, not by the color of his skin. That has never had anything to do with anything.”

Ditka ended his statement saying: “I mean, I don’t see all this, the social injustice that some of these people see. I don’t. I know my dad worked in a steel mill and he brought home a paycheck and we ate dinner every night together. We didn’t have anything, but we didn’t need anything because we had a family. That was a good time in America. I would like to see us get back to that.”

Ditka is a great person that stands up when something isn’t right. I bet his team members would have never gone down on one knee. Football is a sport played by athletics paid millions to do for the entertainment of the fans. It has nothing do do with politics, the Flag or the National Anthem. Most of the players are Black so where is the oppression for them to disrespect our Flag or National Anthem?

The sad thing is they aren’t protesting for a cause. I’m sure there are several players concerned about what they view as injustices but the rest seem to be going with the crowd. If they were actually concerned about racism and social injustice they would be in Chicago trying to help with the 500+ murders, mostly POC, or taking their millions and giving back to the communities that raised them. 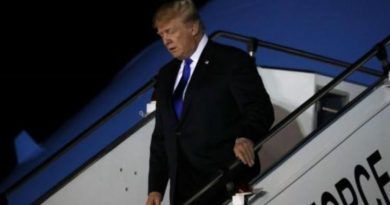 Trump Makes A Stop on Way Home From Singapore, Shows Where His Loyalties Lie (Video)