You have to know that gun activist David Hogg is a leftist because he is NEVER RIGHT. He is a typical teenager who thinks he knows everything but knows nothing! He and his sister Lauren Hogg are working on a new book titled: “#NEVERAGAIN: A New Generation Draws the Line.”

But, one Holocaust survivor did not like Hogg’s usage of the phrase which is specifically associated with “the most systematic genocide of all time.”

So, in a piece for the Arizona Jewish Post, Dov Marhoffer slammed Hogg’s decision to use a phrase.

“The Holocaust cannot properly be likened to any recurring event,” Marhoffer wrote in his piece, “‘Never again’ belongs to the Holocaust, not the gun control movement.”

“Police officers are not Nazi storm troopers because they wear uniforms and carry firearms. Politicians are not Nazis or Hitler because their policies are objectionable to furious critics. Inner cities burning because residents are poor or mistreated is not a holocaust. Describing non-vegan meals as ‘a holocaust on your plate’ is offensive.

“Polarizing hyperbole removes all sense of historical perspective and proportion. If everything offensive or objectionable is a holocaust, then nothing is — not even the real Holocaust — and we invite ‘the-boy-who-cried-wolf’ effect. Idle invocation of Holocaust or Hitler causes the shock value to wear off and people to tune out.

“Today, misinformed students, cynically led by progressives, are using school shootings and their subsequent rallying calls to confiscate guns and turn them over to government — the exact opposite of the core lessons to be learned. This is so fundamentally wrong no justification can excuse it.”

And then he turned his attention to Hogg’s book, which he called “a desperate call for gun control.”

“Lacking historical perspective and sufficient creativity to invent their own themes does not justify them absconding with ‘Never again’ — the sacrosanct call to arms of Jews who survived history’s quintessential tragedy,” he said. “It is an affront to those who perished, and to the survivors.”

Noting that searches for “Never Again” now seem to turn up more about high schoolers and anti-gun demonstrations, Marhoffer says the “Orwellian takeover” of the phrase is used to prop up tired arguments.

“The students’ proposed solutions to classroom murders are the same tired, failed shibboleths that progressive/socialists have pushed for decades,” he wrote. “These have failed to make a dent in the crisis, and instead infringe the freedoms of America’s law-abiding citizens. More than two decades of incessantly demanded background checks, expanded so-called ‘gun-free zones’ and confiscatory gun laws have left inner-city criminals fully armed and their victims disarmed.”

Marhoffer describes himself as a “registered Democrat who cannot fathom the paradox of other Democrats, who believe Donald Trump is a 21st-century version of Hitler, yet they also want the government to have a monopoly on firearms!”

“Disarming law-abiding citizens and concentrating firearms in government hands is fundamentally wrong and disastrous. Our Founders understood this, these students do not. Freedom hangs on these truths,” he concluded.

“Our schools and teachers share blame for censoring these fundamental lessons. Disarming law-abiding Americans runs counter to realities of the Holocaust, invites real calamity and ensures seeds of a new Holocaust will be sown in fertile soil. The book’s publisher and the motivated high-school students should change course. America needs real solutions, not cultural theft.”

“The book is meant to address drug-addled, video-mesmerized, psychotic, murderous classmates, but it misappropriates and reverses the central messages and lessons of the Holocaust,” Marhoffer wrote.

“In the 1940s, the words “Never again” in German were scrawled on the wall of the Muehldorfer Hart Nazi concentration camp in southern Germany, where 2,200 prisoners, mostly Hungarian Jews, were murdered and buried in a mass grave.

“For 70 years, the slogan ‘Never again’ has been the post-Holocaust rallying cry of Jews everywhere. It is a solemn vow that millions of Jews will never again be disarmed and defenselessly marched into camps for systematic liquidation because we can resist with the same powerful firearms we might face in the hands of a totalitarian government,” he continued. “That progressive would take this vow, turn it upside down, and use it to grab guns is an abomination.”

The man’s response is SPOT ON. Exactly correct. The hate, the pain, the whole disgusting things the Jewish people endured…”NEVER AGAIN”!
I am not sure if David Hogg knows how bad it was for the jewish people. The experience is an overrated thing when you don’t have any. David Hogg is not only not as smart as he thinks, he is way less intelligent or informed than his backers think. He is a parody of himself – kina good for a laugh.

It’s long past the time for someone to tell Hogg to just: “Sit down and shut the hell up.” Come back in 45 years after you get a little more life’s lessons.

Melania Met With Japan’s First Lady And Her Fashion Statement Was Out Of This World! (Photos) 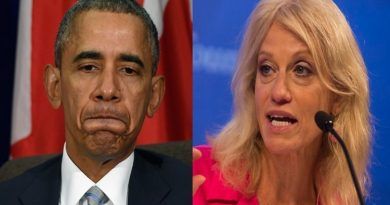 Conway Loud And Clear: ‘Obama Was Given The Nobel Peace, Trump Might Actually Earn It’ (VIDEO)