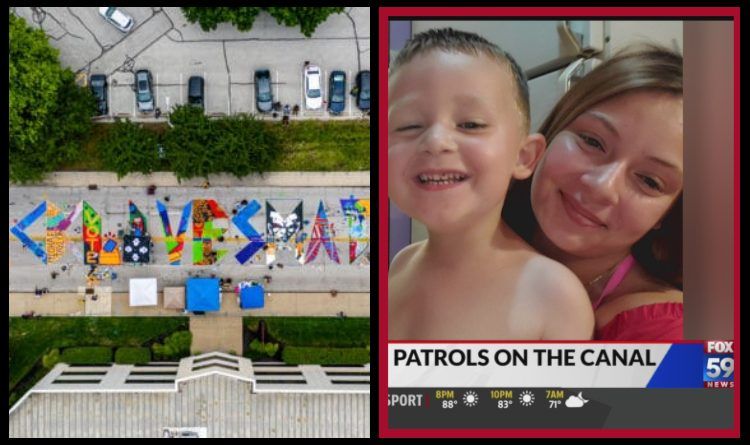 A 24-year-old mother who was allegedly killed by a Black Lives Matter mob in Indianapolis last month, allegedly for saying “All Lives Matter.”

We use the word “allegedly” because Indianapolis PD hasn’t named in the murder of Jessica Doty Whitaker.

But what the city on Indianapolis did managee do to is a paint a huge BLM mural just a block away from the place where the 24-year old mother was killed.

The Nationalist Review reports that “the mural (really it is little more than government-sanctioned vandalism), runs on a stretch of Indiana Avenue between Blackford Street and West Street about a block from the canal where Jessica Doty Whitaker was murdered for saying “All Lives Matter” to a group of violent black supporters of the rioting movement plaguing America’s streets.”

“It’s motivation, I mean it’s a message that really speaks to unity. You know, having a message painted on one of the most historical streets in Indianapolis—Indiana Avenue—so there’s a history component to what we’re trying to accomplish as well,” community organizer Alan Bacon told Fox 59 of the mural.

The case hardly got any media coverage and not one of the mainstream media heavyweights decided to report about the story.

Jessica Doty Whitaker was allegedly killed following an altercation with Black Lives Matter members who were upset that she and her fiance had said “All Lives Matter” last Sunday.

“According to the victim’s family, the shooting started with an argument over Black Lives Matter and language. Eventually the two sides separated and walked away from each other, until witnesses claim the killer opened fire from a nearby bridge and ran away,”

“It was squashed and they went up the hill and left we thought, but they were sitting on St. Claire waiting for us to come under the bridge and that’s when she got shot,” said the victim’s fiancé Jose Ramirez.

Jose admits he returned fire, but didn’t hit anyone. He says Jessica Doty Whitaker leaves behind a little boy.

“She shouldn’t have lost her life. She’s got a 3-year-old son she loved dearly,” said Ramirez.

Explaining to Jessica’s son Greyson that he’ll never see his mom again has been the hardest part for the family.

“It’s hard to tell him his mom is in heaven and if you want to talk to her you have to look up and say, ‘I love you mom,’” said Ramirez.

Just one week earlier, two people were shot on the same part of canal. During one of those shootings, a 14-year-old identified as Curtis White Junior died during what police describe as an attempted armed robbery.

“Our message is that the canal is still a safe to go,” said IMPD Capt. Jerry Leary.

“We’re going through a lot. The 3-year-old boy doesn’t even understand really,” said Ramirez. “I just want justice for Jessica and her son and her family.”

So far police have not released any suspect information, but anyone with information on the case can still contact Crime Stoppers at 317-262-TIPS.
Police are still looking for suspects and have released a video from the area of the murder.

Despite the call for help in identyfying the attackers the Indianapolis PD don’t have any further information about the case, one moth after the murder occured!

Videos: After His Edited Wide-Eyed Speech From Yesterday Biden Came Out Of Isolation And His First Speech Was Even Bigger Disaster

Pure Heartless Ignorance: City Paints Huge BLM Mural Near The Place Where A Young Mother Was Allegedly Killed By BLM Supporters For Saying “All Lives Matter” | Headline of the Day