The people have spoken again and the Dems are shaking in their boots!

It’s time to release the memo…so get your popcorn and watch the liberal meltdown.

It was confirmed today that President Donald Trump has read the House Intelligence Committee FISA memo after the committee voted to release it to the public.
Reporters questioned the president after Democrats protested the release of the memo, but neither he nor his chief of staff John Kelly would respond to questions about whether the White House would allow its public release.

Trump will likely declassify the memo on Friday, despite a few technical edits made by House Intelligence Chairman Devin Nunes.

The document allegedly contains proof that some of the top officials in the Obama-era national security establishment abused their authority to obtain surveillance warrants for members of the Trump 2016 campaign. House Intelligence Committee chairman Devin Nunes assembled the memo with fellow Intel committee members and staff based on classified information turned over by the FBI and the DOJ.

It seems that something like this triggered even overseas governments to panic!

Per The Telegraph, Britain’s spy agencies will be less likely to share confidential information with the United States if they cannot trust that their sensitive information will be kept private. As such, the UK’s security services would be “rankled” if the Nunes memo is made public.

According to The Telegraph, “Figures in America’s Justice Department have also reportedly been warning that the UK-US intelligence sharing relationship could be damaged by the move.”

After the president’s approval the memo will be transferred back to the House Permanent Select Committee on Intelligence who will then publicly release it. Trump reviewed the memo after the committee voted to declassify the memo Monday. Administration officials insisted the memo was undergoing a thorough national security review before any decision on its release.

Trump is currently in West Virginia to deliver a scheduled speech to a meeting of House and Senate Republicans.

One thing is sure… Democratic Party and everyone that helped them in their crimes are in panic mode! Democrats will be screaming racism, sexism, whatever they can to deflect this. They will just deny it, saying it was forged, or altered. There will always be some excuse why they never take responsibility.
And their pals in the media will carry the water for them. 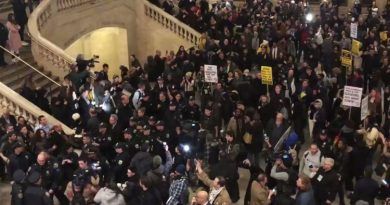 I think the Brit’s need us more than we need them,they have a deep closet full of skeletons that they wouldn’t want ta share. And they keep there people in the dark because they own them. And some of the skeletons are real scary, they should butt out of the peoples government in the USA,we own our government. Or are in the process of repossession thereof. I think our President is doing a great job and knows when ta share and when not too,unlike the elite ruling class of England and/or America. Thank you very mush.

The Brits should be more worried since Christopher Steel their MI-5 agent helped Hillary to get her elected and smeared Trump. Christopher Steel lied and is now in hiding. No one knows where he is. The Brits have no right to threaten our government or our security measures, since we get Intel first and then we decide to share it – OR NOT!

The truth shall set you free, Lies will bury you.