Update: The photos were removed because they weren’t in compliance with our advertisers’ policy.

President Donald Trump’s lawyer Rudy Giuliani has claimed that photographs of underage girls and other “very sensitive” materials were discovered on Hunter Biden’s laptop and have been handed over to Delaware police.
In an explosive interview with conservative news channel Newsmax, the former New York City mayor said he found disturbing content on a hard drive that allegedly belonged to the 50-year-old son of Democratic presidential candidate Joe Biden.

According to Giuliani, a text message sent from Hunter Biden to his father complains about how Hunter’s sister-in-law, who was once his lover, told his therapist that he had been “sexually inappropriate” with a 14-year-old girl.

His sister-in-law went on to say that “he had been sexually inappropriate with [redacted] when she says that I face time naked with her and the reason I can’t have her out to see me is because I’ll walk around naked smoking crack,” the text message, read by Giuliani, allegedly said. The text went on to say that, when she was pressed, she acknowledged that “[redacted] never said anything like that,” but that she maintained Hunter creates a “very unsafe environment for the kids.”

Ine third of the explicit photos of minors in Hunter Biden’s laptop were of the same 14-year-old girl — who is one of his relatives, according to a shocking new report.

Not only were there inappropriate photos of the child on her own, but Hunter Biden allegedly was in some of them with her.

“A source close to the matter, though, who claims to have seen the images on Hunter’s laptop, told Revolver that about one-third of the images are of the same underage girl. Some of the images are topless, while in others she is shown in suggestive positions with Hunter himself,” Revolver News reports.

Giuliani also shared one of the text messages backing up his claim.

Rudy Giuliani says he turned over Hunter Biden’s laptop to Delaware State Police because of “pictures of underage girls”.

If it was JUST WORDS from Rudy alone? There’d be room to doubt.

But the GP reported alleged photos of Hunter with a certain minor this morning.

They say they have a lot more photos but can’t publish them all because due to legal concerns.

This first picture (that has been heavily redacted) shows Hunter taking a photo of himself again fully exposed with a certain minor in the room on the bed.

This second picture shows Hunter in bed. The certain minor is next to him on the bed in the photo.

This might explain why Joe Biden went into hiding with 9 days left before the election. Both Joe and Jill had a legal responsibility to report Hunter Biden to the authorities, as they are both mandated reporters due to their positions as licensed professionals. They cared more about power than doing the moral and legal right thing.

The Fact-Checkers and Joe Biden campaign haven’t responded about the content of the photos that were published this morning. 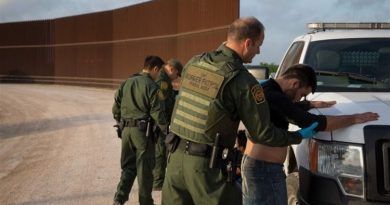 US Judge Sides With Illegal Aliens In Case Against Border Patrol

Video Seems To Show That For The 2nd Day In A Row, Joe Biden Doesn’t Know Who Is POTUS