“As a female and a Realtor, thank you for allowing my right to bear arms. Allowing me to be protected if I show a home to someone with bad intentions,” Jennifer Crumbley wrote in a blog post, according to the Daily Beast.

“Thank you for respecting that Amendment,” added the mother, who worked as a real estate agent in Michigan, according to the outlet, which noted that her staff bio has been taken down.

Jennifer Crumbley, 43, uploaded the letter to her blog in November 2016, thanking then-President-elect Trump for “allowing my right to bear arms” and pleading with him to “end Common Core.”

In her note, Jennifer begins insisting she was “scared s**tless” to vote for Trump in 2016, identifying herself as a supporter of the LGBTQ community and a feminist.

In the corresponding passage, Jennifer asked Trump to “stop common core”, which is a set of educational standards for teaching and testing English and math between kindergarten and 12th grade.
‘MY SON STRUGGLES DAILY’

“You see Mr. Trump, I need you to stop common core. My son struggles daily, and my teachers tell me they hate teaching it but the [sic] HAVE to. Their pay depends on these stupid f**king test scores.

“I have to pay for a Tutor, why? Because I can’t figure out 4th-grade math. I used to be good at math. I can’t afford a Tutor, in fact I sacrifice car insurance to make sure my son gets a good education and hopefully succeeds in life.”

She then complained about “illegal immigrant parents” and their kids from a school where her parents taught.

“Most of their parents are locked up. They don’t care about learning and threaten to kill my mom for caring about their grades,” she wrote.

“Do you realize Mr. Trump that they get free tutors, free tablets from our Government so they can succeed? Why cant my son get those things, do we as hard-working Americans not deserve that too?”

While the mainstream media only posted fractions of the letter we have the full letter for you below and in it, she is just saying what most Americans feel about our country:

Warning the letter contains vulgar language that is not suitable for minors:

While Ethan was charged with terrorism, first-degree murder, assault, and gun possession, Michigan prosecutor Karen McDonald suggested that his parents might also be charged!

Ethan Crumbley’s parents are being lambasted all over social media for their actions, like buying a high-powered handgun for the suspect just days before the attack. Moreover, the parents were also called to Ethan’s school on the very morning of the shooting to discuss certain problematic behaviors displayed by him.

Prosecutor McDonald highlighted Ethan’s father gifting him the Sig Sauger 9mm handgun and stated, “We know that owning a gun means securing it properly and locking it and keeping the ammunition separate and not allowing access to other individuals, particularly minors. We have to hold individuals accountable who don’t do that.”

McDonald did not divulge further details about her plans to charge the suspect’s parents, a development that is likely to unfold in the coming days.

Just In! President Trump Demands An Investigation On Whether Obama Administration Spied On His Presidential Campaign 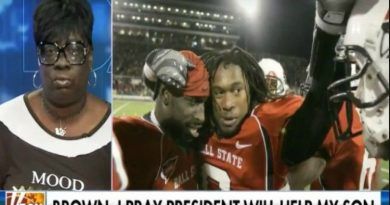 We Must Expose Them! Here’s A Who’s Who of Deep State Criminals, Corruptors And Elites

The media has totally forgotten about the parade SUV guy.

Scumbag people often come from scumbag parents, as in this case.

Doesnt exactly jive with Republican values….Has this been fact checked? What website was this posted on 11/11/2016…..I want to check the way back machine

How come when I visited the wordpress blog for this.. It was the only post in it and it was dated December 1st 2021….Stated it was the oldest blog entry Decemeber 1st 2021 and it was December 3rd when I did this… This story is from the daily beast a leftist rag known for disinformation..That is exactly what this is …..disinformation…