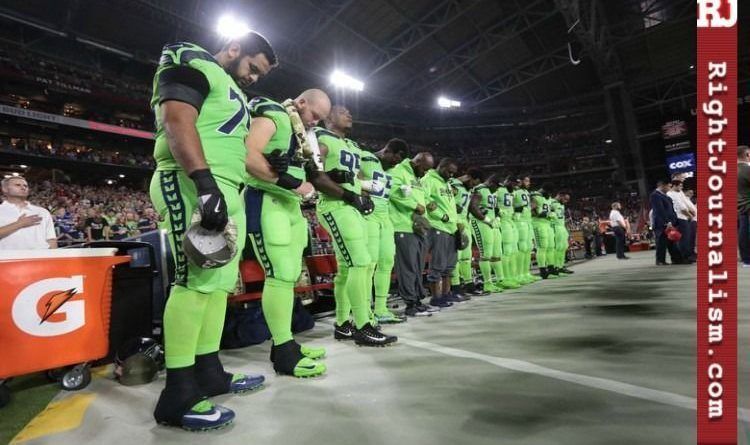 Our National Anthem is more than a song before every game.

America has had enough of these ridiculous NFL players who refuse to stand during the national anthem. But if they continue with this behavior, pretty soon they’ll be playing in an empty stadium. No fans, no cheering, no nothing. They’ll have to wonder if it was really worth it as they’re being told they no longer have a job.

Via The Daily Caller:

But when the Seahawks played the Arizona Cardinals during the Salute For Service game Thursday night, Bennett stood for the Star Spangled Banner. Viewers definitely took notice that the longtime protester actually linked arms with his teammates rather than kneeling during the anthem.

On Wednesday, Bennett had hinted that he might stand for the anthem with Veterans Day coming up this weekend. His father, Bennett Sr,  is a Navy veteran and has expressed solidarity with his son’s protest for criminal justice reform.

But don’t expect Bennett to be a changed man forever. It’s been widely reported that he’ll probably go back to kneeling in the coming games. But for right now, showing some respect for our troops is something that can’t go unnoticed.

Michael Bennett and the rest of the Seahawks stood for the national anthem prior to #SEAvsARI https://t.co/PMEdtUH28v pic.twitter.com/LQfduI0hhX

Now, standing wasn’t so bad, was it? Are you any more or less oppressed now that you actually showed some respect and stood for the National Anthem? Why only display your respect for the Military 2 days before Veterans Day? Why disrespect them the other 15 games of the year?

Too bad, Bennett does not get it. It is all about the Military even if he kept saying it was not. I do not care about Bennett, a millionaire protests. I care when he protests and he and others chose to drag politics into football, and what was worth, is they chose to do it during the national anthem, of which is always played to salute our troops. Shoot the tradition of playing it at the beginning of all sporting events started during WWII and it is obvious why. To say Bennett was not insulting our troops only shows how ignorant he is of the history of the National Anthem or he is LYING.

Another Sport Just Joined the National Anthem Protests And Started New Kind of Protests… Fans Are Pissed Off!

SAS Sniper ‘kills ISIS Commander From Nearly 1.5 MILES Away’ – He Was On A British And US Kill List (Video)

they act like all their wealth has been stripped from them

these are the moat sorry ass looking ??US nfl bull players??

I have ever witnessed in US sports history

what a damned shame to sulk pose

this human sulking propagandering is not help me

to enthused about spending my money any enjoyed sports games

SO hey all you nfl disrespects

if you are ??proud US citizens?? then show your enthused proud patriotic enjoyfulness