It was recently reported that a Lebanese-American businessman with ties to Arab royalty George Nader has been co-operating with the Robert Mueller investigation and gave evidence to one of special counsel’s grand juries. Mr. Nader is an adviser to Crown Prince Mohammed bin Zayed Al-Nahyan of Abu Dhabi, who is one of the most powerful men in the Middle East.

Mueller, whose team has spent the last 10 months investigating possible Trump-related wrongdoing connected to Russia, is interested in high-level get-togethers Nader participated in after the presidential election, according to three people familiar with the case.

But, this is what we know about George Nader so far.

Via Daily Mail: “On Wednesday, an official in the Czech Republic told The Associated Press that Nader is a convicted pedophile and served time in a Prague prison around that time.

Nader was convicted by Prague’s Municipal Court of 10 cases of sexually abusing minors and sentenced to a one-year prison term in May 2003, said Marketa Puci, the court spokeswoman. She said the crimes occurred between 1999 and 2002.

Nader’s legal problems in Prague appear unrelated to his role in Mueller’s probe in the United States.

But they contribute to the portrait of a man who has led a shadowy existence as a go-between across numerous Middle East capitals and who gave testimony to Mueller’s Washington grand jury earlier this month.

In one case, Nader requested oral sex from a 14-year-old in a room at the Hilton Hotel in Prague, Puci said.

After the boy refused, Nader masturbated in front of the boy and paid him 2,000 koruna – worth about $100 today, she said.

Nader was separately accused in Washington, D.C., of child pornography infractions in 1985, but those charges were later dropped. A criminal docket sheet obtained by the AP shows the same birthdate for Nader.”

Well, the scary thing is that the same Nader is now cooperating with Mueller. Mueller’s last two so-called witnesses are one Alcoholic and then this there is Nader who is a pedophile.

And what is even shadier in all this is that Nader is close friends with the Clinton’s. How low is Mueller willing to go?

True Pundit reported: “During Trump’s transition to the White House, Bill Clinton was at a lavish resort in Punta Cana in the Dominican Republic with Nader. That was BEFORE the Mueller investigation. You do the math. 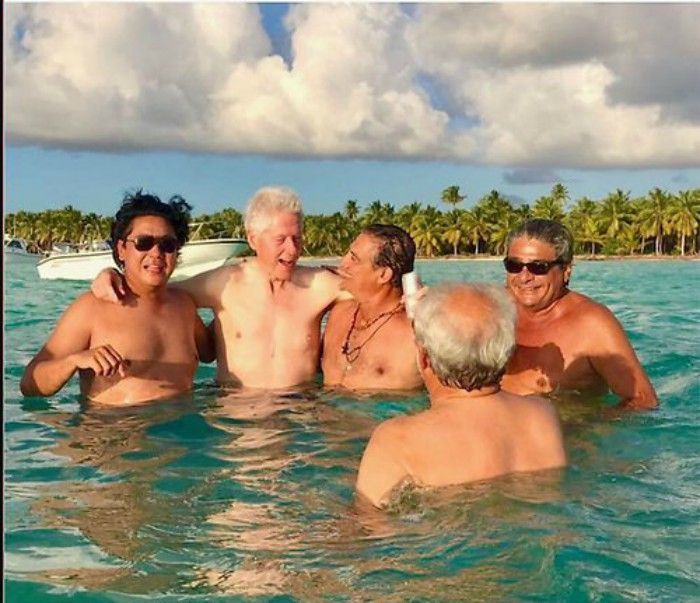 Clinton is seen here kicking back at a beach day on Jan. 2017 in Palmilla, Bayahibe, an exclusive haven of warm waters and refuge, near the so-called Paso de Catuano, very close to Isla Saona. This resort is only inaccessible by private boat.”

Hugging a twice charged pedophile??? And, then the government is using that man as a witness??? That’s disgusting!!!!

This should be enough to end the Mueller investigation. Why isn’t it? Mueller is making an ass of himself every day. He will have NO reputation left when this is all over.

Mueller and his crooks and helpers should be shut down

wpDiscuz
2
0
Would love your thoughts, please comment.x
()
x
| Reply
Cookies are small files that are stored on your browser. We use cookies and similar technologies to ensure our website works properly, personalize your browsing experience, analyze how you use our website, and deliver relevant ads to you. For these reasons, we may share your site usage data with our social media, advertising and analytics partners. You can choose whether or not you want to consent to our use of cookies through the options below. You can learn more about how we use cookies by visiting our privacy policy page. California residents can also exercise their personal information rights through the Do Not Sell My Personal Information page. OkPrivacy policy