We constantly see so-called Hollywood liberals trying to blame Trump for anything and everything. Everything is Trump’s fault!

The same people who told Republicans to “stop whining” when Obama was in office prove themselves to be the absolute whiniest group of people to walk the earth. Many of Hollywood’s elite are threatening to go on strike in protest of our President.

This rumor began circulating as soon as Trump was elected President of the United States, but these idiots continue to push the matter. Our message to them, DO IT. We don’t need jerks like you in Hollywood anyway. The fact that people like Rosie O’Donnell think that the movie and television industry wouldn’t survive without them proves just how ignorant they really are.

Before Donald Trump was officially named our nation’s president-elect, overconfident Hillary Clinton fans pledged to move to Canada if she lost the race. Now, celebrities like Madonna are eating their words.

The (former) pop star says she is now living in Portugal. She announced the news on Instagram, saying “I used to be a basket case but now I live in Lisbon.” Used to be?

Madonna, who is 59, says the “energy” in Portugal is energizing and inspiring her. She wants to “conquer the world from a new vantage point.” She is working on new music and a film called Loved. The film will be based on the novel The Impossible Lives of Greta Wells about a woman who starts time traveling after getting electroshock therapy.

Madonna went on to speak of her rage at the election result, telling the crowd she had thought a lot about ‘blowing up the White House’ but knew that it ‘wouldn’t change anything’.

Madonna suggested in a new interview that she relocated her family from their Manhattan base across the Atlantic Ocean to Portugal to escape Donald Trump.

The singer spoke to Vogue Italia about the motivation behind her big move saying “this is not America’s finest hour.”

“I felt like we needed a change, and I wanted to get out of America for a minute,” the singer told the magazine.

Many on Twitter responded with jubilation at this news:

Madonna has moved her family to Portugal to escape the HORRIBLE things Trump is doing to this country.

Please bring some of your devil-worshipping friends from Hollywood with you as well.

I hope she stays, the second step is to give up, her American citizenship. Hope @JimmyKimmelLive goes next.

Did anyone even realize she was gone?

Well her words cost her badly and she lost her popularity but at least she stayed true to her words and left our country!

The Beautiful People of this era of Hollywood Entertainment urinate on the Grave of Bob Hope and All of the relevant Actors of his day. Keep supporting them by paying them, and they’ll keep acting as they do!

Goodbye, we won’t miss you!

This another good reason to keep Trump in the White House! Maybe more will take Madonna’s lead. They are too numerous to mention.

Share this article if you are glad to see her gone!
Source Supreme Insider

Video: CNN Crew Attacked By Rioters Outside Wendy’s In Atlanta – They Used A Skateboard To Beat The Camera Crew 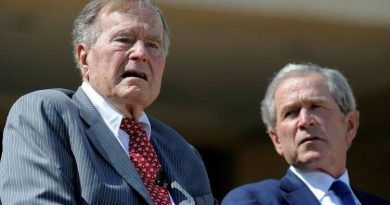 George H.W. Bush on Trump: “I don’t know much about him, but I know he’s a blowhard” – White House Hits Back Immediately!