Cards Against Humanity just announced that it’s purchasing a vacant plot of land on the US-Mexico border to impede the construction of President Trump’s border wall.

Their latest holiday promotion, called “Cards Against Humanity Saves America,” encourages donors to give $15 to help the company buy the plot, while also promising other “surprises” to be mailed throughout the month of December.

In years past, in an effort to combat Black Friday, they’ve had people send them $5 and literally sent nothing in return. Just like they said they would.

This year, they’re taking on The President.

The company says they’ve bought a plot of vacant land on the border of the United States and Mexico in an effort to make it difficult for President Trump to build his border wall.

“We’ve purchased a plot of vacant land on the border and retained a law firm specializing in eminent domain to make it as time-consuming and expensive as possible for the wall to get built,” the company said on their website.

They are also asking people to donate to their campaign.

“You give us $15, and we’ll send six America-saving surprises right to your doorstep,” the company said. “It will be fun, it will be weird, and if you voted for Trump, you might want to sit this one out.”

The company did not disclose where the piece of land is located but said everyone who pitches in on day one will receive an illustrated map of the land.

Since Trump signed the travel ban, the liberal media strictly criticized Trump’s decision. Illegal immigrants were described by them as innocent people who never cause violence in the United States.

If you were born in the USA your supposed to pay for the illegals while you live paycheck to paycheck to make ends meet. This is the Democratic’s Way of thinking.

Chick-fil-A Owner Gives His Employees The Surprise Of Their Lives– Brace Yourselves, The Whiny Liberals Are Coming! 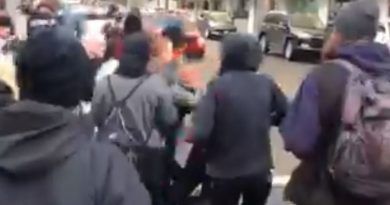 Video: Antifa Militants In Portland Push A Woman In The Direction Of An Approaching Car

Video: A Black Marine With The American Flag Confronts The Angry Antifa Mob All By Himself – “If You Stand For Justice Come Stand With Me”

Build the wall on both sides of them and hold them responsible for security on their property. If they allow people to cross the boarder using their property charge them with criminally aiding and abetting. LOL

And then seize their property!!!

All I can say your company is a scumbag. Go ahead and let those people in to eat up social security for the seniors. Evidently you don’t care for the Anerican people. You sound like you might be Obama cousin because Obama didn’t care about the American people why should he because he is a Muslin.

Enact a law which prohibits buying lots along the US/MEXICO BORDER, THERE SHOULD BE NO PRIVATE LOTS ALONG THE BORDERS, THIS GERVERNMENT PROPERTY, NOT FOR SALE.

There’s fake news and there’s stupid news. This is stupid news.
The government can take any property it wants to for governmental purposes. The liberal snowflakes may be able to delay construction by calling up one of the many “Peaceful protest ” groups that it controls..like Black Lives Matter etc but it can’t stop construction.

That will be a good place to place ice station to work from.

My God Please stop those who want to destroy our country.

If a company does this, it’s unAmerican. Boycott and break them.

I say that they should build the wall around them leaving them on the Mexican side and don’t allow them access to the American side, that would poop on their parade real fast

To all you Trump fans that think border security is his #1 agenda, please explain to me why Trump is allowing pregnant Russian Communist women to come to Florida, stay at his hotels, have their baby’s that get U.S. Citizenship, and then return to the Motherland, do you think it’s possible for these kids to grow up in Russian spy school, then return to the U.S. to do God knows what. And by the way, not everyone that comes across our border gets a S.S. Card.